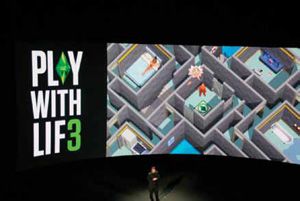 (Above) Electronic Arts took their press event at the E3 Expo 2010 to the historic Orpheum Theatre in Los Angeles last month. (Left) The combination of a 32-input Evertz multi-viewer, a series of TV One format converters, and Folsom Image Pro scalers helped facilitate the 18 simultaneous PIP windows on the custom, curved 20x50-foot screen.

International game developer, publisher, and distributor Electronic Arts (EA) took its press event at the E3 Expo 2010 to the next level when it amped up the energy at the historic Orpheum Theatre in Los Angeles last month. This was the third consecutive year that Video Applications, Inc. (VAI), a WorldStage Company, provided technical support for EA’s annual press event at the trade-only Electronic Entertainment Expo (E3), and the design for this year’s event was a departure from their previous presentations.

“EA wanted to make a bigger statement at E3 this year,” notes VAI Sr. account executive Michael May. “At previous press events, they chose a basic and elegant large single screen design to introduce their new titles. In the months leading up to this year’s show, the design became more elaborate as they added a custom 20-x54-foot curved screen, a large 3D projection screen that flew in for one segment, an upgrade to a full Hi-Def camera and switching system, and (just two weeks before the event) decided to invite 18 gamers onstage to play the new Medal of Honor title on screen simultaneously.”

VAI was charged with installing a great deal of equipment in a short amount of time and ensuring that the big-screen display delivered the desired audience experience in the Orpheum’s very traditional proscenium- stage environment. But the group game play posed the greatest challenge for VAI.

Jeffery Hornaday, the show’s creative director, designed a clever rail system that lowered 18 PlayStation 3 consoles (each with its own 23-inch LCD monitor) into place as the gamers took their positions on stage. The combination of a 32-input Evertz multi-viewer, a series of TV One format converters, and Folsom Image Pro scalers helped facilitate the 18 simultaneous PIP windows on the custom, curved 20x50-foot screen.

Debra Robins, executive producer at Plumbago Productions, LLC, who designed and produced the spectacular event, says, “I don’t believe anyone has ever staged an 18-person live demo with 18 windows onscreen, but VAI was able to figure out how to make it work, and everything came together beautifully.” She describes the moment the demo began as quite literally breathtaking: “When the flying bar with the game consoles and monitors came out of the stage’s fly space and down in one swoop you could hear the audience gasp.”

Switching requirements for the show were handled by a Panasonic 450 HD/SDI video switcher and a 20-input/ output Spyder system. Recording and video playback was all digital, utilizing AJA KiPro digital recorders and VAI’s proprietary Media Hub playback system that played the custom aspect ratio content for the curved wide screen at a native 2916-pixelwide resolution along with the 3D content at a 3840-pixelwide resolution. VAI’s support continued with two stacks of Christie HD18K projectors, creating a two-image blend on the curved 54-foot main screen, and more than 64 audio and video feeds to the press members in attendance and to plasma and LCD monitors throughout the Orpheum. The company also furnished the AV signal for the live webcast and the live telecast on the G4 Television network.

Switching requirements for the show were handled by a Panasonic 450 HD/SDI video switcher and a 20-input/output Spyder system.

To introduce its Crysis 2 title in stereo 3D, EA captured the guests’ attention by flying in a 20- x 35-foot Stewart Filmscreen Silver 3D seamless screen. Two additional stacks of Christie HD18K projectors were outfitted with glass polarizing filters to deliver the amazing 3D experience gamers are clamoring for this year.

VAI also augmented the Orpheum’s existing in-house audio system with L’Acoustic ARCS speaker cabinets positioned at center and left/ right rear locations to provide full 5.1 surround sound. A Yamaha M7CL digital audio console was added as a sub-mixer for the onstage games and demos, and 12 Shure wireless mics were utilized during the presentations.

“From a technical and staging standpoint, this was one of the most challenging shows we’ve done at E3,” reports Robins. “VAI is always absolutely fabulous to work with. They continue to go the extra mile to make sure that we’ve technically got what we need and that everything works properly. And, when the usual on-site issues arise, they fix them — there’s no downtime.”