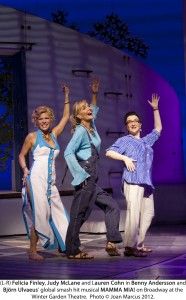 MAMMA MIA! spent the past 12 years on Broadway at the Winter Garden Theatre, and for the show’s veteran Sound Designers Bobby Aitken and Andrew Bruce and Associate Sound Designer David Patridge, the move was not without its challenges.

The Broadhurst Theatre’s design itself was one of the biggest challenges that the team faced. Although many Broadway theaters share this situation, the box seating on the left and right near the proscenium extends out quite far into the sight line and therefore, slightly overshadows the speakers for some of the seats.

“In order to provide the best listening experience we could for every seat, we used a fairly substantial speaker package,” says Patridge. “We placed d&b audiotechnik E8 loudspeakers both near the proscenium and further back along the sides of the room to give the audience complete coverage. The d&b speakers compliment a main left and right line array of Meyer Sound MINA’s, and extends the coverage to the shadowed areas. It’s very smooth as you go from one side of the house to the other and something we really worked hard to achieve. It’s a smaller house, and in many ways it’s more pleasing. You don’t have as big of a room to fill with a speaker system. That was our biggest challenge, and Masque Sound was once again able to provide us with the gear we needed.”

The move to Broadhurst Theatre also provided an opportunity for the team to upgrade to a digital console and strengthen the front of house mix. “At the Winter Garden Theatre, we were using a Cadac console, one of the last analog consoles left doing Broadway musicals,” adds Patridge. “Although the Cadac has been a reliable workhorse for us, we felt it was time to retire the console and modernize the show, in that sense. Masque Sound provided us with a DiGiCo SD7 digital console for the Broadhurst production. The digital console allows us to eliminate the monitor desk, and with the SD7, we actually mix the monitors to an Aviom system directly through the console. We now have one console mixing both front of house and monitors. In addition, the SD7 takes up only about six seats as opposed to the Cadac, which took up 15 seats in the orchestra.”

As the full time vendor for MAMMA MIA!, Masque Sound also provided a wireless package of Sennheiser SK5212 transmitters and EM3532 receivers, coordinated by Eric Rivera and the Masque Sound wireless department. Since Broadhurst Theatre is sandwiched in between the show Matilda to the east, Phantom of the Opera to the west and a block of theaters just to the north, Masque Sound’s expert frequency coordination team worked hard to ensure there were no signal interference issues between the shows, as theatre walls are not enough to cut off the transmission.

“The spatial considerations in the venue dictate, to a large extent, what equipment you are able to use, and asking Masque Sound to discard the existing rental system and provide us with all new equipment was quite a tall order,” adds Patridge. “They were extremely generous and offered us new gear for the show without having to incur a ton of extra cost. It’s this type of service and support that gives Masque Sound the longevity it has experienced with MAMMA MIA!. The show continues to sound wonderful, and we are now excited to be in our new home.”
In addition to Masque Sound’s equipment, Patridge also credits his talented team with making the move such a success. Production Sound Engineer Kevin Kennedy and longtime original Broadway show Mixer Craig Cassidy were instrumental in ensuring that the move went smoothly. The show brought the same crew over from the Winter Garden, which, according to Patridge, was a godsend in terms of making sure that the move was glitch free.