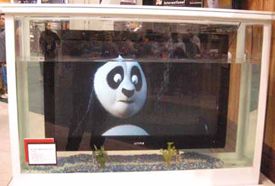 Flat Panel Video Displays Are Ready For 3D And GreenAV

Long before flat panel video displays (FPD) became popular with consumers, they established a strong foothold in commercial markets. From early plasma installations for information display on the floor of the NYSE to boardrooms, training facilities, and trade shows, FPDs proved their mettle outside the home while the residential world was still tied for the most part to CRTs with a smattering of rear-screen projectors. Of course, that has all changed, with LCD and plasma sets all but commanding the direct view video display market, no matter what the application, from casual viewing to the most critical video monitoring. The commercial, institutional, government and military, house of worship, and lodging and hospitality installations we deal with are certainly no exception.

Flat panel displays that are impervious to the elements are becoming more widely available.

We’ve come a long way since early-stage plasmas that were expensive and highly prone to burn in and LCDs with low contrast and poor off-center view quality. With that, it is time for our annual catchup view of the state of flat panels and a few hints for the newcomer to our industry and the seasoned professional alike.

Particularly since CES in January, the biggest news in the world of displays has been around the subject of 3D, and it remains to be seen whether that technology will ultimately resonate with consumers and for those specifying and designing commercial installations. Here we must note that sets designed for consumers use have, almost exclusively, relied on technologies that require active-shutter glasses to view the 3D effect. The technology works and the 3D can be very immersive, but it must be noted that the active glasses are not cheap, somewhat fragile, and at this time there is no standard for them.

That means in a sports bar or similar installation, using consumer sets because the premium they charge for 3D is not great will be offset by the high cost of the glasses and the need to replace batteries. The bottom line is that the cost of the glasses will make it almost impossible to justify 3D. However, there is an alternative in the form of flat panel sets that use polarized systems for creating the 3D effect. The sets are a bit more expensive, but the glasses can be purchased at throw-away level pricing. That’s the very reason this type of flat panel display technology was used in pubs throughout the U.K. during 3D tests by BSkyB earlier this year. No complaints about the picture quality, and the publicans were able to provide all viewers with glasses. The use of polarized displays with passive glasses has already been used in the U.S. in various museum and other public venue displays, as well as in broadcast production trucks.

That all lays down sufficient precedent for any 3D installation you may become involved in, with the caveat that you need to check that the displays have HDMI inputs compatible with your program sources. ESPN has already launched its 3D channel in time for the World Cup, and there will be much more sports oriented programming from them (and others) throughout the year, leading to the BCS Championships next year. Like it or not, you may not be able to escape 3D, and you’ll need the display panel info to do that.

Along with 3D, the next biggest change in FPD this past year that will expand in the months ahead is the use of LED backlighting for LCD panels. First, a plea that when describing these sets in bids or discussions with clients or prospects that you describe them exactly that way: “LCD sets with LED illumination.” Calling them “LED TVs” is simply incorrect, and while it is tempting, it could get you in trouble with those who know better.

The advantage of these sets is not only their thin profile compared to sets with traditional CCFL (fluorescent tube) backlights, but also their lower energy consumption. Within this type of set it is also important to explain the difference between edge-lit sets and back-lit sets. The former have a smaller premium over CCFL models and are thinner. The latter, while more expensive due to the larger number of LEDs involved, have the capability to do local area dimming that results in greatly increased contrast. Here, the trickledown from consumer video displays may begin to provide some cost relief for commercial sets, but even without it the technology is worth considering on its other merits.

In terms of panel size, there has been little change in the “ultra large” category, with Panasonic’s 103-inch plasma the only real choice above 100 inches, with the mammoth 152- inch Panasonic still more or less a working science experiment. Even if it were available, from a price perspective (not to mention ease of moving the thing!) you’d be better off with a 3x3 matrix of 50-inch PDPs. The Panasonic 103-inch is a proven performer, and it now has a slightly smaller 85-inch cousin.

Next down are the traditional consumer and professional sizes from 40 inches to 65 inches in the mid-range, and 22 inches to 37 inches in the mid range. There, you have a wide variety of choices in LCD, though plasma remains a relative rarity below 42 inches and currently isn’t available below 32 inches.

Going to smaller, monitor-sized displays, specialty companies such as Marshall, Data Video, and Wohler, to name just a few, join the majors in providing a wide range of sizes for multi-monitor installations such as security, incoming program monitoring, and source or system control. Here, let the application be your guide, but the vendors give you almost all the choices you need.

Ah, so many displays, so little time, but a few more things worth mentioning. The first is the increased availability of true “outdoor” flat panel displays. Now available from a number of suppliers to meet the extremes of hot, cold, and wet conditions, they greatly increase your placement options for video. Out at the pool? At the entrance to a garage? Bringing your digital signage outdoors? No longer a problem on any of those fronts.

An interesting future technology application for OLED is the possible availability of transparent displays, as shown here in a 14-inch Samsung OLED laptop display.

As to technology, OLED has been on the cusp of market availability for some time. Sony is no longer selling their 11-inch-diagonal consumer model, but they did announce a 7.4- inch monitor at NAB. Best suited for monitor use, but hopefully a taste of things to come. Look for a few OLED sets from Korean-based companies in the mid-teens size range perhaps this year, but it will likely be into 2011 or 2012 before we see OLEDs competing with plasma and LCD in the mid and larger size ranges. This is one not to promise availability to your customers for a while.

Summing up, flat panels are simply the only real remaining choice for video displays up until the application is better suited by projection. They are reliable, offer great picture quality, have better energy efficiency than ever before in both LCD and plasma, and are available in virtually every size you could want. They can be thin both in depth and in frame/mullion size for video walls, or encased so that they are impervious to the elements. There was a time where you had to justify using them due to price. These days there is no justification not to have them not only replace any remaining CRTbased video monitors or displays, or to replace earlier generation FPDs approaching end of life.

The skeptics Columbus faced can now be said to have been correct at least when it comes to video displays: It is a flat world!

Despite all the recent news about flat panel display energy consumption in the wake of the deliberations and ruling of the California Energy Commission, no matter what the technology, energy usage for flat panel displays has dropped in recent years. Perhaps this gives you a reason to propose that clients with older displays consider a gradual replacement program to give them the performance, image quality, and energy conservation benefits of today’s FPDs.

Michael Heiss (CaptnVid@aol.com) is a technology and marketing consultant based in Los Angeles, CA.