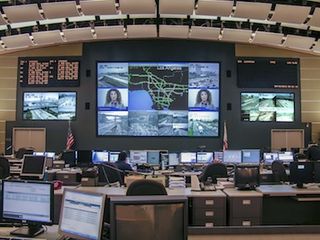 “Caltrans District 7 has more than 400 cameras on the highways of Los Angeles and Ventura counties,” said Electrosonic project manager, Guy Fronte. “They can review camera feeds 24/7 in the facility and when there’s a traffic event—road damage or an accident—they can magnify that feed on the videowall. The videowall is integral to 24-hour traffic management.”

The existing videowall comprises a 12-screen center unit in a 4x3 configuration flanked by a pair of 6-screen 3x2 units. The giant wall features 80-inch diagonal screens in the center and 52-inch screens on the sides.

“They monitor heavy traffic volume locations and can bring any one of those feeds up on the larger central display as needed,” Fronte explained.

The wear and tear of more than five years of constant operation had taken its toll on the existing rear-projection engines and begun to degrade the facility’s ability to monitor traffic, so Electrosonic replaced the videowall engines with Christie one-chip SXGA displays to take advantage of improved projector quality. Christie RPMSP-D132U displays were selected for the center screen and RPMX-D132U displays for the side screens.

The side projectors were installed in existing cabinets behind the videowall; the center projectors were placed in a huge metal framework previously built by Electrosonic.

“Caltrans District 7 has the most spacious rear-projection room I’ve ever worked in,” said Fronte. “It’s very well thought out, so replacing the engines was quite simple.”

The primary challenge for the installation was working in conjunction with the 24/7 hours of the facility. “We couldn’t take down the wall during rush hours, so we swapped out one projector at a time to allow for continuous operation,” Fronte said.

Videowall control is achieved using a Quantum processor previously installed by Electrosonic. The Crestron touchscreen control system that operates the wall, turns the system on and off and monitors lamp life, was modified to accommodate the new projector engines.