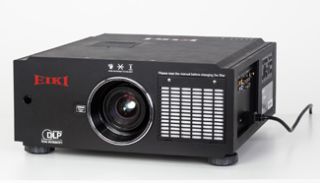 The new EIP-UHS100 single-chip DLP projector from Eiki International, Inc. has an 8,000 ANSI Lumen brightness and a 2400:1 contrast ratio, according to the company.

Built-in Edge Blending allows users to combine multiple projected images into a single seamless image, while and Image Warping facilitates digital image manipulation for either corrective or creative purposes. Additionally, the projector incorporates a lens memory feature with as many as ten saved settings. This makes the EIP-UHS100 ideal for venues where, for example, there are movable walls—enabling the focal settings to be memorized in advance for each projected distance.

“The EIP-UHS100 is a feature-rich projector that adapts well to the ever-growing demands of the pro A/V community," said Steve Rubery, Eiki's national sales manager. "With built-in connectivity and installation options, it can adapt to a wide variety of venues. Of particular note is a .76-.93 t/w optional lens with shift capabilities that enable the projector to be used where space is at a premium!”