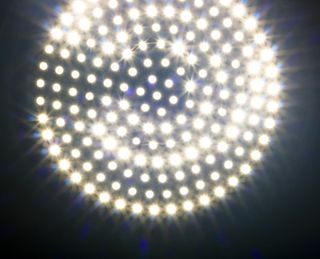 Like other digital technologies, LED lighting has benefited from the effect of Moore’s Law (referred to by lighting professionals as Haitz’s Law, after Dr. Roland Haitz of Agilent Technologies, when applied to LED), doubling in luminosity and dropping in price at regular intervals to the point where LEDs nearly rival conventional incandescent and discharge-type lighting systems. They’re also becoming more flexible in their ability to render color and incrementally dim.

But “nearly rival” is still a key phrase here. Acknowledging that LED is not a panacea for those who need to include lighting in their AV designs, Cadena says. “It’s still a work in progress.”

The Inevitability of LED

Although LED has vastly improved on the color-wash front, its ability to match discharge, tungsten and other types of lighting technologies for producing white light still lags. However, there are signs that both LED’s underlying technologies and the dynamics of its manufacturing base are moving it forward at a faster clip.

February saw the 13th annual Strategies in Light Show, held in Santa Clara, Calif., the heart of Silicon Valley. While economic sentiment at the show reflected the fact that the LED industry had built out faster than the market could absorb new products (China, in particular, has vastly accelerated production of basic LED fixtures and, in the process, lowered the price floor), practical innovation seemed to be moving forward nonetheless.

On the manufacturing side, leading makers of conventional light fixtures are bringing their economies of scale into the LED market, with moves such as the acquisition of LED developer Selador by lighting giant ETC in 2009, and Royal Philips purchase of Color Kinetics in 2007. In the pro AV space, Barco’s 2010 acquisition of lighting manufacturer High End Systems and similar moves indicates that LED is ready for its close-up.

Still, uptake of LED technology has varied according to event sector. For instance, the concert touring business seems to have embraced LED. Chris Lisle, who runs his own lighting design company from Nashville, Tenn., says he tries to use LED in some way on all of his tours and projects, attracted by the technology’s affordability, durability and capability, as well as its environmental friendliness.

“The fact that LED requires so much less power than other standard concert lighting fixtures actually has a good domino style effect: less cable needed to power them, thus less truck space, less manpower needed for load in and out,” says Lisle, who has employed LED on tours for Keith Urban and Billy Currington, and for the Nashville 2011 July 4 Celebration. “LEDs are getting brighter and richer in color. Their long lamp life and ease of maintenance make them attractive from a durability standpoint. The obvious selling point for using LED is still power; I have designed a couple of club tours in the past few months where the entire touring system could fit on three 20-amp circuits.”