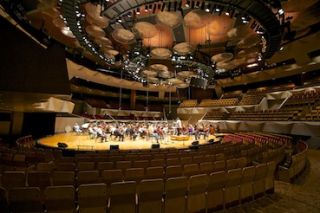 The primary PA is comprised of four horizontal arrays of ARCS II—a cluster of six constant curvature cabinets pointing toward the main orchestra seating section, two four-cabinet arrays firing into the left and right mezzanines, and a smaller three-enclosure array covering the rear parquet section. Three additional ARCS II—each individually hung in a horizontal orientation—serve as upper front-fills and address the upper ring and rear mezzanine seats. Four double-stacked KIVA clusters are also positioned overhead to supplement coverage to some of the upper seating and other areas.

Down below, up to eight additional KIVA can be positioned on the stage lip as needed for front-fill, while low frequency reinforcement in the space is achieved via four SB15m subs arranged in a cardioid configuration. System power, processing, networking and control are accomplished through a combination of six LA8 and two LA4 amplified controllers.

“I looked at this project with four different manufacturers, and one of the deciding factors to use L-Acoustics was the performance of ARCS II, which fit the bill very well,” said Akustiks partner, Anthony Nittoli. “Boettcher is an asymmetrical surround concert hall, so it’s an extremely challenging environment to put a sound reinforcement system into. But ARCS II’s tightly controlled coverage pattern very nicely allowed us to place sound exactly where we wanted it and keep it off of the surfaces that we didn’t.”

Over the past couple of years, the Colorado Symphony Orchestra has increasingly peppered its show roster with soloists and guest acts as diverse as Trey Anastasio, Béla Fleck, Guster, DeVotchKa, Kip Winger, Pink Martini, and Rodrigo Y Gabriela.

“The Orchestra’s performances with pop and rock artists have all been very successful and certainly necessitated the presence of a serious, rider-friendly sound reinforcement system,” said Aric Christensen, Boettcher Concert Hall’s head of audio for the past decade. “I had previously mixed on V-DOSC and KUDO systems, so was very familiar with L-Acoustics, but ARCS II was largely unknown to me. However, I trusted both Anthony’s design expertise and the manufacturer’s reputation, and we’ve been extremely happy with the results. The point-source approach of our ARCS II system is much more appropriate for the room and everyone that has mixed on it so far has responded really well to the whole experience.”

Christensen points out that the system gets used on almost a daily basis, be it providing simple vocal reinforcement for the conductor introducing pieces to full reinforcement for a band with some spot-miking of various orchestra soloists.