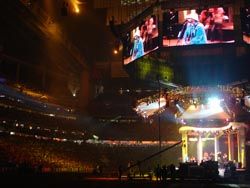 LD Systems provided support for the Shell Downstream One Conference.
For a staging company, the touring market can often be an unattainable industry, as Ausmus has noticed. "The touring market is somewhat of a closed loop these days, with the rollups of Claire Brothers buying ShowCo, DB Sound, and Sound Image. Some of these other corporations are soaking up productive companies, and it's getting tougher and tougher to compete. The touring market is quite cliquey. It's a system that feeds on itself. I've seen guys make careers just farming out of the market. We're starting to create our own internal referrals."

Another profitable market for LD has been the Rodeo industry. Ausmus expanded, "We do eight or nine annual rodeo events, inlcuding San Antonio, Houston, Waco, Austin, Dallas, and the finals in Las Vegas."

LD has achieved success because of the diversity of its business, but this can also be a tricky aspect to grasp when assigning crews to shows. Ausmus said, "The interesting thing about us is mix of what we do. It's our strength, but sometimes it can be our weakness. One day we'll be doing a high profile corporate job, and the next we'll be doing a street fair. The strength is having that market to work out of and be known within, but the weakness is having a guy that's doing a corporate show being pushed into a festival the next day. It can be a rollercoaster for our staff."

The complexity of LD's schedule often makes finding the right employees harder. Ausmus explained, "We tend to hire guys that can tread through whatever comes their way. Other times we'll just cherry pick out of the freelance pool. A guy that's all inked up we can send to a radio show, but now a corporate show. We mull through hundreds of resumes to find the right staff for the right market. We spend a lot of time doing that."

Most of the time, working with so many different markets can help more than hurt, as Ausmus noted. "After 9/11, there was a big dip in the corporate sector, but we didn't miss a lick, because we work with a lot of churches and they did a bunch of feel good events. Where we lost two or three small jobs, we picked up a huge job. There's always something shaking in one of the sectors of the entertainment industry." For more information visit www.ldsystems.com.