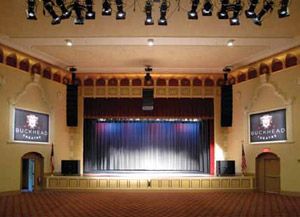 ATLANTA, GA—The Buckhead Theatre originally opened in 1931 as a movie palace and was used in that capacity for over 50 years. In the mid 1980s it was renamed the Roxy and became a concert venue but fell into disrepair. Owner Charles Loudermilk purchased the building in early 2008 and closed it for a two-year renovation.

Loudermilk brought in Novare Events of Atlanta, who in turn was able to bring the legendary music promoter Alex Cooley out of retirement to help manage the venue, so they are ready to book an impressive roster of performers and corporate clients. Technology consulting and integration were provided by TSAV of Atlanta, GA, which designed the video, audio control, and video distribution systems.

Loudermilk decided to pull out all the fixed seating in the main auditorium and leveled the sloped floor to accommodate 28 dining tables for up to 224 people. They can also set up theater-style seating for audiences up to 850 or accommodate up to 2,100 standing. The newly restored Buckhead Theatre is a flexible venue ideal for concerts, corporate events, fund raising dinners, off-Broadway shows, product presentations, seminars— even weddings and bar mitzvahs.

“This is a super flexible space,” said Keith Reardigan, the project engineer for TSAV. “It was very hard for the client to know exactly what kinds of programs they will bring into the facility, but, due to our experience in similar renovations, we knew there would be a need for movies, corporate presentations, theater, and live sound.”

To control these systems, Reardigan used a Crestron AV2 processor installed in the theater’s main rack, with a production-level interface using XPanel running on an HP workstation. He also included more limited and automated controls accessed from C2N-FT-TPS4 touchpanels built into lecterns that can be set up in the theater and each of the meeting spaces in the building’s converted second floor area. “If there’s a production manager in charge of a concert or stage show, we can give him full control over the installed projection, sound, and video distribution systems from XPanel. But for a meeting or corporate presentation, with a little setup the presenter can have the basic controls he needs on the touch panel.”

The ground floor theater includes a 16- by 23-foot rear screen served by two Digital Projection Titan SX+500 projectors with wide-angle lenses, projecting side-by-side and edgeblended using a Vista Systems Spyder video processor. “We used two projectors mainly because of the real estate we had to work with and the brightness we needed,” Reardigan explained. “It’s a massive screen, and we just didn’t have the throw distance for a single projector.”

The sound system includes a 7.1 surround processor for feature films as well as a 48-channel Yamaha digital mixer for meetings, theater, and concerts, each feeding audio into a series of Crown amplifiers and JBL THX-certified loudspeakers. For the concert and main PA rig, TSAV used a Nexo GEO S Series line array system powered by NXAMP 4x4s supplemented with the JBL THX certified surround for 5.1 movie viewing purposes. Reardigan also designed the video distribution system to transmit video and sound from any of the sources in the theater to the six flat panels in the lobby and bar, two 15- by 11-foot screens on the marquee outside, and on each projection screen in the four meeting rooms upstairs. For these systems, he used a mix of Crestron QuickMedia with Blonder Tounge RF distribution products.

“We used Crestron QuickMedia transmitters, switchers, and cable to move the signals around the facility for a number of reasons,” Reardigan said. “First, we wanted an all-digital signal path, and QuickMedia provided an economical solution. We had a cable-length issue going from the equipment rack in the theater to the marquee, which QuickMedia solved. Finally, QuickMedia provided a nice solution for room combining in the meeting rooms upstairs.” Reardigan used a QM-RMCRX-BA room controller in each room and a QMMD8X8 switcher to provide input at the presentation positions.