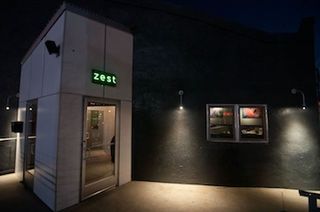 When veteran restaurateur Casey Staker conceived of Zest, he knew it had to have a great sound system—and he also knew that he had to have ultimate control over the performance and volume of that sound system. Local AV integration firm Performance Audio obliged, using a Symetrix Jupiter 8 processor to dial in Zest’s fidelity and a Symetrix ARC-WEB to provide custom control of all relevant parameters directly from Staker’s smartphone.

“Staker has been in the restaurant and bar business for a long time,” said Jake Peery, system design and installation expert with Performance Audio and the individual responsible for Zest’s custom sound system. “More than once, he’s seen a good time ruined by overzealous DJs, who effectively chase patrons out the door with sheer volume. Since he plans on a regular rotation of local DJs along with not-infrequent shows by national DJs on tour, he wanted some personal insurance that no such thing would happen at Zest. I recognized that the Symetrix ARC-WEB was the answer. It would give him all the control he wanted on his smartphone.”

The Symetrix Jupiter 8 processor fills most of its eight inputs from an iPod dock, a microphone, a computer and a balanced stereo pair located at a modest FOH position. Repurposed QSC RMX-series loudspeakers and JBL Control 25s join a collection of new JBL AM7212s, AC28s, and ASB6118s to provide the system with serious output. A repurposed Crown CTS4200 powers the loudspeakers in less critical locations, while new Ashly KLR 4000 and KLR 5000 amplifiers power the most prominent loudspeakers and subwoofers. “The Ashly KLR series gives me the best bang for the buck,” said Peery. “Nothing else touches them on price, and the output is loud and clean.”

Of course, Staker wouldn’t be at Zest all the time, and his staff would need to control the system in his absence, so Peery installed a Symetrix ARC-2e wall panel remote in the manager’s office. The ARC-2e allows the staff to recall presets for different modes of operation. However, Staker’s ARC-WEB control digs deeper and allows him alone to override zone volumes. “In addition to being a great sounding and inexpensive device, the Symetrix Jupiter’s support of ARC-WEB was a deciding factor in this installation,” said Peery. “ARC-WEB is easy to set-up and use, and is compatible with many popular web browsers, operating systems and devices, including iPhone/iPad and Android. Casey’s on an Android device right now, but that might change. If and when it does, ARC-WEB will still work just the same.”