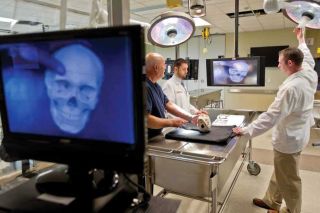 The University Of Central Florida’s College Of Medicine Gets Interactive

Custom-designed Mitsubishi monitors are integrated with CyberTouch Resistive Touch Screens. They hang over dissection tables, and the professor, whose terminal is linked to digital cameras, can record dissection and disseminate the information to other lab computers or to various lecture halls.

ORLANDO, FL—Should you choose to donate your body to medical research at the University of Central Florida’s new College of Medicine in Orlando, FL, you will be letting in the light of the sun as well as the light of knowledge. Unlike some older institutions with anatomy labs in sequestered spots, UCF’s lab, in a school built from the ground up, is located on the top and fourth floor of the modern facility, which is replete with glass.

In addition to its high visibility locale, the lab is unique in its approach to video technology. An innovative partnering of Mitsubishi Digital Electronics American and touchscreen designer/manufacturer CyberTouch has resulted in the installation of 22 32-inch Mitsubishi LDT322v flat screen monitors. The custom-designed Mitsubishi monitors are integrated with CyberTouch Resistive Touch Screens.

The monitors hang over dissection tables. The professor, whose terminal is linked to digital cameras, can record dissection and disseminate the information to other lab computers or to various lecture halls.

Mitsubishi built and shipped the monitors to CyberTouch for integration of the touch-sensitive surfaces, said Mitsubishi regional account manager Brian Emerson. “Ron Knappenberger, UCF College of Medicine assistant director of educational technology, came to us with the design idea. Jessica Abrante of Xerox Audio Visual Solutions introduced us to CyberTouch president Abraham Gohari. Xerox Audio Video Solutions played the role of consultant and brought the products together, and the college did the installation with its own staff.”

In addition to these monitors, the medical school is using 40 Mitsubishi 52-inch reference monitors throughout the building. They also have a new Mitsubishi WD8200U projector—a wide XGA 6500 lumen dual lamp LCD projector—eight of which are in large lecture halls.

“The client has since purchased several 52-inch displays with the same CyberTouch touchscreen device to install as a way-finder,” Emerson said. “We understand that the new medical college at UCF is a reference site that will be viewed as a model for other universities and medical schools, to see UCF’s systems and technology and get recommendations for their own schools, and I hope potential clients approach us for input. We can certainly recommend integrators in their areas.”

“Typically, these labs are located in a basement, but here, there is glass everywhere, and all this light is not conducive to great video reproduction,” Marshall said. “But Mitsubishi is one of the best at brightness. Their reproduction of the color white has always set them apart in the industry and leads to one of the most natural pictures on the market.”

The pairing of Mitsubishi and CyberTouch is unusual, he said. “I haven’t seen two companies from basically different industries come together from out of the blue, but the need was there. The system had to be rugged because the students are cutting into cadavers, a task which called for accuracy and dependability.”