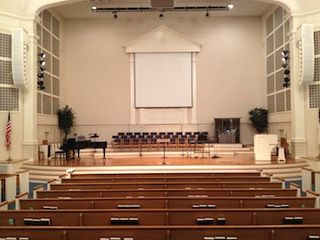 Campbellsville Baptist Church is located in a town by the same name. The town’s main street is lined with century old brick, stone, and iron buildings with Italianate architecture facades, and the church also fits this classic description. Campbellsville Baptist seats 900 worshippers in a recently remodeled traditional 2-floor setting, one being a small balcony. The church's previous system featured a center cluster which provided uneven coverage, poor low frequencies, as well as static and odd popping sounds.

An Adamson Metrix system was brought in for a simple demo in the room, and without even fine tuning the system, the customer was "blown away."

The initial parameters for the new system’s placement were based purely on ideal room positioning and aesthetics. The Adamson system installed was painted in a custom white color down to the rigging hardware. As the venue is mostly used for traditional worship, the goal was to have complete and clear coverage of the entire room so that there was not a bad seat in the house.

“We had originally looked at front fills, but after tuning the arrays we realized the room was completely covered with terrific sound with no additions,” said Ryan Jackson of JCA Media LLC, the consulting company in charge of the sound design and installation.

The suitable system design consisted of 2 arrays of 8 Metric 5 degree enclosures with 2 Metrix W 15 degree front fills hung underneath, with a Metrix double 15-inch sub flown at the top of each array.

“We needed to get energy up in the room due to the balcony being the location of the sound engineer, we had a 5-foot wall to keep energy off of on the front of the balcony, and we had to cover 20-feet underneath the balcony to the back wall. This challenge was conquered by fine tuning the arrays.”

Additional speakers used with the install were 1 fulcrum subwoofers on the ground as well as Adamson Point 8 boxes for Choir Monitoring. All Adamson speakers were powered and processed by Lab.gruppen PLM10000Q’s. Other upgrades included Allen and Heath iLive digital system, Audio Technica 5000 Series wireless receiver, and DPA Instrument Microphones. In addition to the audio components, a brand new lighting redesign using ETC and Martin Lighting was implemented, as well as a complete remodel of the venue’s broadcast system.