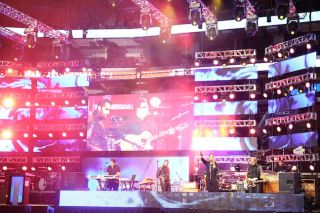 "Originally we were going to use a lighting company out here in California named Felix Lighting, but they told me that the trucking costs would eat up my budget, and they suggested Mainlight Industries,” Equizabal said. “Mainlight was onboard, but suggested using Pinpoint Lighting for the production support. So I visited Pinpoint and met John Duncan, and we started going over what fixtures should be used. They needed to look great on television but also should be able to create spectacular lighting effects for the audience actually in the arena. I had some Sharpy and Aura fixtures in the design, and had wanted to use the Viper as well, but they were out of my budget for this show. John told me about the intellaspot; I had never used them before, but I valued his opinion and trusted him on it. We demo'd it at a friend's church, and it was exactly what we were looking for. I liked the indigo highlighters, which could provide really cool eye candy, and I ended up choosing the intellaspot as the main spot fixture in the rig."

Eguizabal said he placed the 24 intellaspots on the roof truss over the stage, 'just to give a ton of gobo splashes everywhere'. He also employed them as his main back lights for the band and speakers. "The intellaspots allowed me to carry those effects into the audience for ballyhoos and such. The cameras are positioned where we get a lot of 'up' angles because of the stage's positioning, so placing them there accentuated the eye candy of the indigo highlighter; the fixture has a huge lens which is good for the camera's eye. The gobos, strobing and zoom capabilities with 24 fixtures were spectacular."