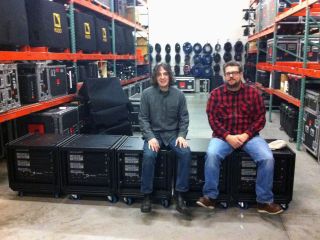 Visual Horizon Communications (VHC), Inc. has optimized the performance of its KUDO and other L-ACOUSTICS systems with the purchase of five LA-RAK touring amplifier racks, each loaded with three LA8 amplified controllers.

According to VHC Head of Audio Paul Smith, the switch from legacy RK12 racks equipped with LA48a amplifiers to LA8-equipped LA-RAK units has been a success.

"We've actually had four LA8 in our inventory for over a year now, two of which are permanently paired with our KIVA/KILO rig. When we first took delivery of them, we staged an A/B listening test between our LA48a and new LA8, and the difference was incredible--especially when we deployed the new amps with our KUDO rig. Even using the LA8's stock presets without any tweaking, it was as if we had just bought a whole new speaker system. Of course, we liked the loudspeaker before, but with LA-RAK, KUDO really shines!”

"The LA8 presets also help our systems as a whole match up much more evenly. For example, the transition between KUDO, dV-DOSC and/or KIVA when combined sounds so much smoother with the new amps. Everything plays together so much nicer."

Smith notes that he and the rest of the VHC team appreciate LA-RAK's compact size and AES-EBU compatibility for digital signal distribution.