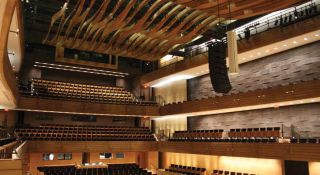 The audio system is anchored by a flown center array of eight JBL VerTec 4887A and augmented by a pair of flown VT4881A subwoofers. The entire eight-box array flies out of sight through an overhead trap door when not in use.

TORONTO, ON, CANADA—As the principal performance venue for the Royal Conservatory of Music in Toronto, the new Koerner Hall hosts not only classical music but also amplified concerts by notable jazz, blues, and world music headliners. Koerner Hall was designed in the classic European “shoebox” format by KMPB architects, and endowed with N1-rated acoustics by U.K. acoustical consultants Sound Space Design. The “live” acoustics are ideal for symphonic and choral music, but with variable acoustics supplied by moveable curtains, the venue also presents a characteristic well suited to the robust sound reinforcement system which was installed in the venue.

Designed by Martin van Dijk of Engineering Harmonics and installed by Westbury National Show Systems, the audio system is anchored by a flown center array of eight JBL VerTec 4887A and augmented by a pair of flown VT4881A subwoofers. The entire eight-box array flies out of sight through an overhead trap door when not in use. Power comes from a potent sextet of Crown I-Tech HD Series amplifiers. Additional coverage is supplied by twin groundstacked arrays, each comprising four VT-4887ADP mid-high cabinets and two VT-4881ADP subwoofers. The internally powered floor arrays are equipped with JBL DrivePack technology, engineered in coordination with Crown, making them easy to assemble and remove as needed. “We are very pleased with how quiet the powered arrays are,” noted Malcolm Harris, production manager for the Royal Conservatory of Music, “both in terms of the low electronic noise floor and essentially inaudible ambient amplifier noise due to the fan-free design.”

“The JBL Vertec line array system has received very favorable responses from both touring engineers and members of the public,” Harris added. “I’ve already had calls from some industry insiders who’ve commented about the sound here being possibly the best they’ve heard in live performance.”

FOH mixing centers around a Soundcraft Si3 digital console, which was recommended for the job by Westbury. “It was the perfect fit on all counts,” said Westbury project manager David VanVeldhuisen, “including budget and input/output requirements. Also, since it mimics an analog console, integration was easy.”

“The new BLU system is by far the most versatile for this application,” said VanVeldhuisen. “We have two different BLU networks, using BLU-Link for intra-network communications, and using both analog and Cobra-net for inter-network communications. Having them talk all on the same design file means that control and preset information can follow over both networks.”

From the user’s viewpoint, Harris said, “This is my first experience with BSS Soundweb and I must say that it is impressive. It has proven reliable and exceptionally flexible.” As an example, he cites a request to use a wall plate in an adjoining venue as a microphone input. “I was impressed how quickly this could be done in the DSP, and how we can easily make other changes like this to lend flexibility to our operations.”

Many other Harman Professional Group components work in harmony with the main reinforcement and digital infrastructure systems. A total of 84 additional JBL AE and Control Series loudspeakers are deployed as main system fills or in the associated PPM (paging program monitor) systems. The PPM systems are powered by 10 Crown CTs Series amplifiers. Also, the hall’s microphone locker is stocked with 13 AKG microphones, including a quartet of the world-standard C414B-XLS variable pattern condenser models.