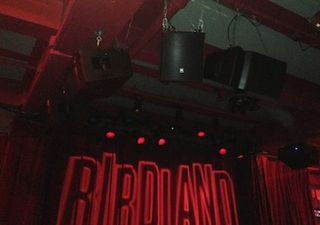 “As the engineer at Birdland, the most important thing for me to be able to do is amplify the musicians’ stage performances in the most naturally sounding way so that the system is almost invisible,” said Birdland house engineer, Richard Bernard. “The legendary musicians who perform at the club almost always have their own very distinct sound and that’s what people want to hear: ‘that sound’.”

To achieve this goal, Birdland hung six JBL VRX932LAP loudspeakers directly above the stage facing the audience—two facing downstage towards the main house, two located stage right towards one side of the room and two on stage left facing the rear side of the bar. In addition, two Control 29AV loudspeakers are hung at the far side of the bar, giving total coverage for the room. The two ASB6112 subwoofers are hung downstage on the left and right front corners.

“I’m running the system in mono, and the subwoofers are connected to the spare aux send on the mixing desk, so I’m free to choose which channels I send to the subs,” Bernard said. “I used to have to mix for the house and the bar would basically get what they would get. That’s no longer a problem as we’ve had many compliments on being able to hear from that side of the room.”

That said, the most noticeable improvement in the system is the level of clarity, according to Bernard. “This is a massive help because the response of instruments and vocals is very true and I’m not forced to just keep turning up an instrument in order for people to hear it—once everything is in its own little pocket in the mix, it just sounds great.”