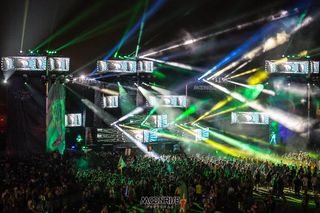 Hauss tailored the lighting rigs to meet the needs of each of the four stages. The Stellar Stage exclusively hosted DJs in a giant structure custom designed by Hauss. He selected 56 Claypaky Mythos 2 for the stage placing eight each on the decks atop seven towers whose height varied from 40 feet to low platforms. The towers also featured flame units and lasers. Custom plexiglass rain hoods “saved the day for the Mythos” when the weekend weather turned inclement, said Hauss.

A longtime Claypaky user, he chose Mythos 2 for the Stellar Stage for the “hybrid nature” of the fixture.

“It’s the best of both worlds,” said Hauss. “I could use it as a beam light and as a profile. As a festival designer you want that flexibility to deal with the individual artists who might want either or both looks. And with only DJs playing on this stage I also wanted to make the experience as all-encompassing and overwhelming for the audience as possible from the design of the structure to the pyro and lighting.”

Hauss says the Mythos 2 delivered exactly what he expected.

“Claypaky lights are solid fixtures that work consistently and hold their position," said Hauss. "They can take the stress of an EDM festival, which is way harder on fixtures than traditional music festivals. The really fast
tempos and aggressive sound pushed the fixtures for two almost 12-hour
days.”

The Lunar Stage featured more traditional EDM bands, such as Pretty Lights Live, and had a more conventional theatrical stage design. For them, Hauss opted for 28 Claypaky Sharpys “scattered all over the stage, in the air and on the deck.”

The Solar Stage, which showcased DJs and rappers under a tent structure, included 14 Claypaky A.leda B-EYE K20s in its rig.

“I’ve been using B-EYES since they came out,” Hauss reports. “They’re very versatile: an effects light, which you can run in shapes mode or in extended mode to create a ton of looks easily, and a wash light to simply wash the stage.”

The smallest stage, dubbed Celestial Garden, hosted both DJs and bands. Hauss chose eight silver Sharpys to add beams to the design and noted that the fixtures’ silver housings looked great from their position downstage.

Hauss tapped a number of grandMA2 consoles to control lighting on all four stages. He deployed two full-size units and two NPUs for the Stellar Stage; one full-size, one grandMA2 light and one NPU for Lunar; two lights for Solar; and two more lights for Celestial Garden. On the latter stage, one system drove the lighting while the other drove an abstract configuration of LED tiles.