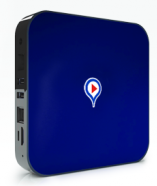 The What: The first round of BroadSign Xpress smart players is in production with units available for delivery as early as September. The company is now accepting orders for BroadSign Xpress; the first large-scale request for 1,001 units having been placed by a client who recently subscribed to the company’s Software as a Service.

The What Else: BroadSign Xpress was announced in February 2013 and is BroadSign’s first step into the digital signage hardware solutions market. The player runs on the Android operating system and was created to both eliminate the challenge of selecting a good long-term hardware solution and reduce the cost of hardware per deployment.

Following the release of BroadSign Xpress, 200 participants across the globe were given a beta player as part of the BroadSign Trailblazer Program. Recipients tested the player throughout the duration of the program and BroadSign incorporated resulting feedback into its final product design.