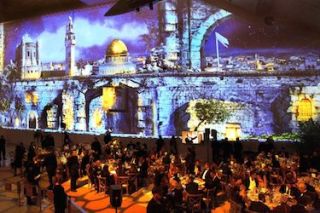 Two Christie Roadie HD+35K 3DLP projectors were used to projection map a view of Israel in ancient times.
Serving an average of two million guests annually with an audience among the most diverse of any museum or science center in North America, the California Science Center, located near the Los Angeles Memorial Coliseum, is a vital community resource and an integral part of California’s educational infrastructure.

“The Discovery Ball was very thematic and we wanted to give people the sense they were in a different place,” said Christina Sion, vice president, food and event services, California Science Center Foundation. “For the Dead Sea Scrolls exhibit we premiered at the gala, it made sense to use projection, and there is nobody on the planet I would ask to do this more than Bart Kresa [founder and master projection designer at BARTKRESA Design]. We have worked together before and I always admire his work. It continues to get bigger, better and more incredible.”

Two Christie Roadie HD+35K 3DLP projectors were used on the largest screen with the other 12—two Roadster HD20K-J, eight Roadster HD14K-M, and two Roadster HD10K-M—used for the medium and smaller screens.

The evening started with a cocktail party, during which guests walked through simulated versions of the Qumran Caves, where the Dead Sea Scrolls were discovered. Guests then left the caves, making their way down the escalator where they then experienced the stunning projection mapping display in the large dining area.

“It was the entire two-story atrium of the dining space, which made it so extra spectacular. It was enormous,” Sion said. “And because it was so big, we needed the right projectors in order to make this really pop, because there was a lot of space to cover. We wanted people to feel like they were there, at the site. And they did.”

According to Kresa, the projection display required some clever engineering to overcome the peculiarities of the venue.

“One challenge was figuring out how to project on a wall with two airplanes hanging in front,” he said. “To solve the problem we used the wide angle lenses and extreme projection angles, which was corrected with warping the image. The other challenge was to project at difficult angles onto a big, two-story-tall screen. To overcome that, we created distorted content that looked correct when it was projected onto the screen. We used Christie projectors because they are very dependable, produce a great quality picture, and provide great color.”

Rather than simply displaying a static image, the projection provided a dynamic passage through a full day in ancient Israel.

“We projected the Dead Sea so the view of Israel seemed like back in ancient times, with the display gradually changing throughout the Discovery Ball,” Kresa said. “We projected a daytime look, then a sunset look, and then a night look. We then ended it with a fire-like ceremony that created a whole scene with flames and candles.”