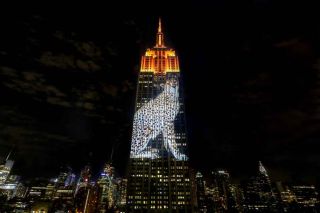 A leopard sitting on the side of the Empire State Building.
The show, “Projecting Change: The Empire State Building,” presented a “Noah’s Ark” of endangered animals, according to Psihoyos. Using photography from his colleagues at National Geographic, he produced a looping reel that included manta rays, birds, reptiles, lions, and even a gorilla that climbed to the top of the building. The multimedia production ran from 9 p.m. through midnight on August 1.“We call projection mapping presentations of this magnitude, ‘weapons of mass instruction,’ said Threlkel, who worked closely with Psihoyos to stage “the most dramatic” event possible to bring attention to the world’s endangered animals. “It took us four years to finally bring Louie’s extraordinary vision to life, but we only had three hours to tell his story. As such, there was no second chance.”