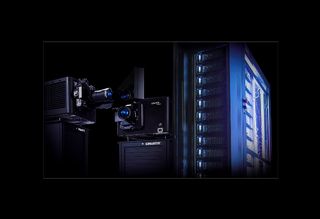 John Zendt, CEO of Moody Gardens agrees. “We thoroughly researched all known laser options and the D3D/Christie solution had many benefits including the price. We’ll own this laser system outright, which is important to us, saving operating dollars over the life of the laser modules.”

This latest collaboration between D3D and Moody Gardens builds on a longstanding partnership. In January 2011, D3D and Moody co-hosted the first annual Digital Cinema Symposium. The following year, at the 2012 Digital Cinema Symposium, D3D showcased the first 4K 3D demonstration, 11.1 3D audio, high frame rate 3D as well as a prototype laser on a giant screen. The 2012 event was a milestone, marking the first time that industry professionals acknowledged a digital presentation exceeded the quality of a 70mm film in a side-by-side comparison.