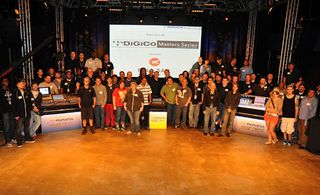 Over 90+ people were in attendance—comprising a diverse group of systems integrators, audio consultants, production companies, houses of worship and performing arts center operators, as well as Full Sail students and faculty. Over the course of two days, they were given in-depth tutorials with the opportunity to get hands-on with virtually all of DiGiCo's SD Series consoles (SD5, SD Ten, SD11, 3xSD9s, and an SD8). The training covered the gamut from basic system setup and cabling to features and operation, as well as a hardware and software review. DiGiCo's SD software (V621) was showcased on several of the consoles (adding 96KHz capacity for the SD9 and SD11 on Cat5E as well as a offering a new MADI Router for all SD consoles.)

Industry veterans Howie Lindeman and Mark Frink were also in attendance to answer questions and to share their real-world, hands-on experience and road stories. Lindeman, who is currently on tour with The Elvis Presley Concert Tour, has mixed in many iconic studios from the Record Plant to the Hit Factory and on tour with Roberta Flack, Natalie Cole and many others. Frink is the former Technical Editor of MIX Magazine and is currently mixing monitors on a DiGiCo SD10 for Grammy awarded artists, the Zac Brown Band.

"Our goal with the new Master Series is to take people wherever they need to go," said Shelton, "whether they're already owners of our consoles or just thinking about investing in one. These hands-on training opportunities will take the intermediate to advanced production engineer deeper into our systems, provide a tool kit to sharpen their mixing skills, offer helpful tips, tricks and shortcuts for using our consoles and impart information as to what sets DiGiCo apart."