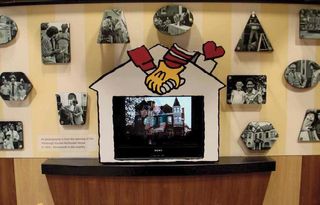 One Adtec signEdje receives the information stream from an HD CATV set-top box encoded through the Edje 4000.

NASHVILLE, TN—The Big Mac turned 44 this past August, but despite its age, there is no sign of a pending midlife crisis for this special-sauced sandwich—it is still popular with crowds of people young and old. So popular, in fact, that thousands of Big Mac fans every year flock to the Big Mac Museum and Restaurant in North Huntingdon, PA, where visitors can find out everything they may ever need to know about the double-decker delight in video displays.

When the museum was proposed in 2007, Ken Coey, pro sound design specialist for ASCC in Pittsburgh, PA, said he noticed Adtec Digital on one of his manufacturer’s cards then looked up the company on the internet to research the products. “I was intrigued by the Adtec product and thought it looked like just what we needed,” said Coey. “We chose three signEdje’s and an Edje 4000. They are excellent quality and have been worry-free for four years, running twenty four hours a day, seven days a week,” he says of the Adtec units. “They have really worked great for every possible use.”

The restaurant is a state-of-the art McDonald’s with a 10-footround, aluminum truss video ring that is suspended through an arched ceiling consisting of six Sony 42-inch television screens. The ring’s visual power starts with the video stream from the Edje 4000 as well as two signEdje units each feeding alternating sets of three screens.

One signEdje receives the information stream from an HD CATV set-top box encoded through the Edje 4000. This signEdje accepts and decodes the video and transmits it to three television sets that display Fox News as well as other McDonald’s-provided videos.

The second signEdje supplies three televisions with various videos about McDonald’s company history and general trivia, the man who invented the Big Mac, Jim Delligatti, and other information about how the Big Mac and the museum have grown over the years. “Our videos are constantly being updated by a video production person and easily uploaded via the Adtec scheduling software,” explained Coey. The signEdje also controls the Allen & Heath iDR-8 digital mixer, switching audio on or off for various videos where the audio is needed.

The third signEdje streams Ronald McDonald video testimonials and information to a 26-inch LCD display that is embedded in the front of a miniature replica of the Ronald McDonald house. “The Adtec products play a huge role in the design of the restaurant space and I would recommend them to anyone looking for reliable, cost-effective streaming digital signage products,” he added. “The service and support team at Adtec has been great throughout the design/implementation stage and since our doors opened.”