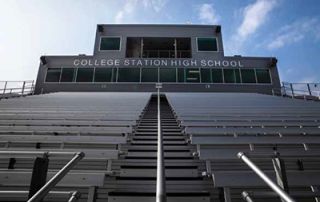 The equipment list may seem eyepopping for this future-thinking educational facility that’s just down the road from Texas A&M, but there’s nothing overbuilt about it. As system designer Bill Schuermann of HFP Consultants points out, equipping the 14 areas (including theater, classrooms, sports fields, and gymnasiums) of this new high school was all about empowering the AV professionals there—which happens to be everybody on campus.

“A friend of mine always said, ‘Everyone has two jobs: What they do for a living, and AV,’” said Schuermann. “Students and teachers today have iPads, iPods, tablet computers, and laptops to connect to systems. They know what good video and sound is like when they experience it, but they can’t always articulate that. So what we’ve done on the imagery side is to focus on giving them good contrast ratios, high light levels, and screens that can withstand ambient light. On the audio side, that means providing linear systems with a common phase response that sounds uniform, regardless of the space that you’re in.”

Schuermann, working alongside with John Hall, director of construction services at the College Station Independent School District, and subsequently with integrator Covenant Communications, put a priority on high-quality sound in all appropriate areas. That meant outfitting the auditorium with Meyer Sound M1D line array speakers and MID-Subwoofers, covering the baseball field with Meyer UP-4XP and UPJ-1P speakers, and endowing individual classrooms with Meyer MM-4 miniature wide-range speakers. Soundcraft 12- and 16-channel digital mixers are often part of the audio path, as is BSS signal processing.

“There was a strong mandate for good speech intelligibility whether indoors or outdoors,” Schuermann explains. “If the orchestra is rehearsing in one room, and then they transition to another for performance, it should sound the same within reason. I’ve designed systems for a lot of high schools and universities, but this project was special because it wasn’t just for one room. We had 14 systems to give faculty and students a family of sound and functionality. So a teacher working in Room A today and Room B tomorrow doesn’t have to relearn how a system is working.”

On the video side, the College Station High School classrooms were created to easily accommodate efficient connections to PCs, all the better to employ them as teaching tools. Images play out from PCs and/or DVRs via ceiling-mounted Digital Projection MVision Cine 260-HB video projectors, onto Stewart Filmscreen motorized projector screens.

In anticipation of the video playback, Schuermann and his team prepared for the toughest environments they could think of. “We always assume that the lights will be on!” he laughed. “It’s that simple. The lights will always be on, and the worst possible conditions will prevail. Therefore, it is always better get some horsepower (lots of lumens) up there on a screen that will work in ambient light.” Working with Rayce Boyter, principal with Houston, TX-based architects SHW Group, HFP Consultants installed floor-standing or wall-mounted racks that housed the system components. Compact Crestron control systems organize the action—currently CNX -B6B six-button keypads are in use, with Crestron Fusion RV planned for the next round of updates at College Station High.

“One thing we didn’t have was space for rack and/or equipment rooms,” Schuermann said. “Each of the AV systems had to be within the room, or within the space. In the music classrooms, we employed the Middle Atlantic 24-space rack, which is equipped with wheels and has the mixer on top. The inputs are in the rack, which allows them to do playback or recording while the band is there, and then move it out when they’re not.”

Greg Griffin, project manager at Covenant Communications, helped ensure that the aforementioned ease of use would be built into every installation—a feature that’s of particular importance in a high school environment. “These systems have to be extremely intuitive, because of the high number of people they’ll be interfacing with,” noted Joe Smart, sales manager for Covenant Communications. “We do training on the front end, but we will never get to interface with everyone using the system. In addition, someone using it two years from now will be taught by someone currently using it. So we have to rely on well thought-out systems that a non-audio person will not only be able to use themselves, but instruct others on as well.

“The stars of this design are the highly intuitive Soundcraft Si Line of digital mixing, and the Meyer audio systems. We love the fact that Meyer was used so extensively because we truly believe they should work reliably at a high level of performance for as much as 20 years.”

When AV aptitude can be seamlessly passed on from generation to generation—or even just class to class—that translates into a near-future advantage for College Station High School graduates. “When you give students tools like this at the high school level,” Bill Schuermann said, “they’ll know as much about digital technology, technical sound, and video than most of the students attending high school. Going into a university after attending College Station High School will give them a technical leg up, from day one.”