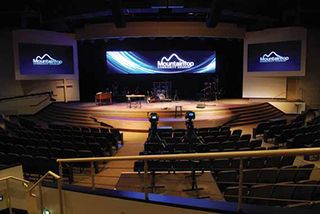 When Mountaintop Community Church in Vestavia Hills, AL approached Media Visions to upgrade its display technology from standard to highdefinition widescreen, they were expecting to simply replace an existing triple-projection, edge-blending system.

“The big deal about that is the price point,” said Mike Cruce, owner of Media Visions. “Years ago that would not be possible, and now it is.”

The original challenge presented to Media Visions was to replace the two projectors flanking either side of the stage for what is used as the main IMAG, as well as the central projection screen display. Cruce noted that over the years, they have struggled to keep edge blending projection easy to use for clients, since it is more labor intensive, and lamp replacement can be a major issue between the cost of replacement and any unexpected failure. As a result, the Media Visions team began to study the mean time between projector lamp failures, how often Mountaintop Community Church used its system, and how that translated into lamp usage over time.

Media Visions also researched some of the newer offerings in LED technologies, in which price has come down considerably and quality gone up, leading them to discover a 6mm LED solution that they were able to custom build to their specifications for the facility.

“It’s not that projector technology isn’t good or doesn’t last,” Cruce noted, it was the lamp and other consumables or intangibles that led them to seek an alternative. There were a lot of considerations that went into the decision to pursue this alternative.

For example, projectors would have to be flown or accessed from a catwalk or other lift system. In contrast, the Media Visions LED solution is on motors, so if anyone needs to access the screens for maintenance or other means, they can automatically take it right down to the ground.

Noise was another benefit LEDs had over projection, the latter of which has audible fan noise, often right over a speaking pastor’s head. But with the LED display, the fans are behind the screens, and much quieter than that of projectors.

These factors and other intangibles became tangibles for Mountaintop Community Church. “All of a sudden, the cost of ownership and logistics began to make sense to them,” Cruce said.

He also jokingly noted, “We worked ourselves out of a job,” by installing LEDs, because they used to be contracted by the church for the projector maintenance.

Media Visions was also tasked with performing a complete gut of Mountaintop Community Church’s AV systems, which hadn’t been updated since the mid-’80s. From there, it was a pretty standard HOW install for the Birmingham integrator.

They opted to stay with projectors for the IMAG screens on both sides of the stage, since there wasn’t enough resolution in the 6mm LED wall to also do IMAG coming off cameras. They selected native HD chips on the camera, and matched them with a pair of Barco RLM-W8 projectors.

Ultimately, what Media Visions learned about pricing out the roughly eight-foot by 38-foot LED display with native 920 pixel wide resolution made the experience that much more beneficial, Cruce said. “A few years ago, we never would have dreamed of this because it wouldn’t have come close in price.”