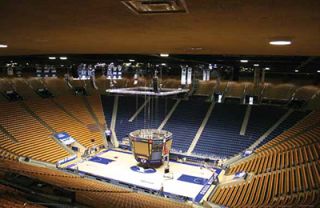 Named in recognition of benefactor J. Willard Marriott, the hotel magnate, BYU ’s Marriott Center is one of the largest basketball arenas in the NCAA; indeed, it was larger even than any NBA arena when it was completed in 1971. Measuring 384 feet by 344 feet it remains the largest basketball arena in the NCAA’s West Coast Conference, and seats nearly 21,000 BYU Cougar fans (reduced from a former capacity of close to 23,000 with this latest, more spacious, seating reconfiguration).

Brothers Brad and Troy Streeter, who respectively serve as BYU ’s campus multimedia engineer and audio production manager, designed the new L-Acoustics rig—using the manufacturer’s proprietary Soundvision 3D simulation software—in collaboration with Deward and Kale Timothy, also brothers, of Poll Sound, an L-Acoustics Certified Provider. “We put a dV-DOSC system into BYU ’s 1,200-seat DeJong Concert Hall with Poll Sound about four years ago, so we had a lot of confidence that a KARA solution would be ideal for the Marriott Center,” commented Troy Streeter.

According to Deward Timothy, who started working for Poll Sound nearly 50 years ago and purchased the company from its founder, Harry Poll, in 1974, BYU did its due diligence for this latest project: “They had a shootout with various manufacturers and still L-Acoustics was the one that they preferred.” The upgrade encompassed only speakers and amplification with onboard DSP, as the console, a Yamaha PM1D, is not yet scheduled for replacement, Timothy noted.

With the brand established, he continued, “The conceptual design was a collaborative effort between Brad and myself. Brad worked out the design details and did all of the modeling and the CAD work. My contribution to his efforts was to verify his work, provide the rigging design, provide recommendations and details on the signal flow and equipment choices, provide the detailed equipment list including all accessories, and provide as-built documentation.”

“Marriott Center is a very active multi-use facility that hosts something every day, be it a basketball practice or game, devotional service, fine arts department production, or something else,” said Brad Streeter. “So we needed a very versatile system that could handle all those different types of events.”

To accommodate that mandate, half of the main speaker system may be reconfigured. “Part of it is install and part of it is production versions of the L-Acoustics products,” explained Timothy. “There are eight arrays; four of them are permanently hung and four are movable. We also supplied the motors and everything for the production part.”

The four permanently installed center arrays each incorporate eight KARAi enclosures and two SB18i subs. In addition, four arrays each comprising eight standard touring KARA models plus two SB18 are installed on motors. Each array may easily be lowered and re-hoisted elsewhere in the arena, or may be combined with the permanently installed arrays to accommodate a wide variety of productions. All eight arrays are powered and processed by a combined total of 16 LA8 amplified controllers.

Sixteen arrays, each configured with five KIVA enclosures plus a single KILO low-frequency extender, were flown in a symmetrical ring approximately 80 feet out from the KARA arrays in order to cover the upper bowl seating areas. These arrays are powered by 16 LA4 amplified controllers and delayed by 80ms. The installation also includes two additional clusters, each of five KIVA enclosures, positioned as downfiring constant curvature arrays to deliver energy to the arena floor.

The reconfiguration of the arena’s seating, which has significantly expanded pricing options while lowering the cost of 75 percent of the tickets, involved lengthy construction work. With a hard deadline of the school’s August commencement service looming, Poll Sound, in conjunction with BYU ’s crew, had barely a week in which to perform the installation.

“We had everything pre-planned,” said Timothy. “We went in previously and set the points on the steel and that kind of thing, but the actual physical work was over about a one-week period. My crew is truly impressive, and I can only attribute the efficiency of this installation to their experience and expertise.”