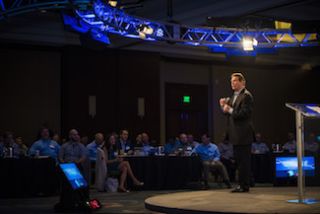 Keynote speaker Joe Theismann spoke to AVEC attendees about the need for change to offer people something new.

Keynote speaker Joe Theismann spoke to AVEC attendees about the need for change to offer people something new.

The opening reception was perhaps a bit of a misnomer. As AV industry luminaries were shuffled along into the banquet hall, glasses already swaying in hands, the hallways abuzz with the continuation of laughter and greetings—groups were coalescing for spontaneous photographs—and no one was paying attention to the direction they headed nor seemed to care where that was anyway. The memory registers as more of a scene from The Great Gatsby than what one would expect from InfoComm’s 2015 AV Executive Conference (AVEC).

Yet this is the memory that served to kick off the tightly organized and thoughtfully curated program the association worked to pull together. In just the third iteration of the event, attendees across the board commented positively on how different this version was.

AVEC already felt well underway by the time the master of ceremonies began warming the crowd of groggy, yet eager attendees on the first morning.

NFL-great Joe Theismann started the day off riffing hard on Cleveland sprinkled amidst various nuggets of wisdom: the need for change to offer people something new; attitude preceding everything we do in life; enthusiasm that defines us; and ranking talent as the last factor enabling success, following character and intelligence.

Meanwhile, various attendees were more or less live tweeting the presentations, blasting out snack-able quotes, like this one (garnering the most “engagement” of mine—in analytics parlance:

“People can sense by your presence if you’re energized and excited about what you do” @theismann7 #AVEC2015.

Overall, the three major presenters of Day 1 coalesced into a tidy message. Theismann, inspiring with his stories of success, overcoming odds, and teamwork; Leo Hopf with the notion of rethink, reinvent, reposition from a strategic position; and Joe Pine heralding the experience economy.

A few of the main points from Hopf were that we spend a lot of time trying to get things right and not make mistakes, and there becomes an unhealthy obsession with avoiding errors. “Mistakes don’t kill you,” Hopf stated. “Organizations get in trouble when they play it safe.”

He encouraged the concept of chaos as a necessary ingredient. Time management was another area he touched on, noting how difficult it is to renew your business when everyone is so busy running it. The result leads to managing and doing instead of actually leading. Overall, it’s less important to be right or have something better than to have clarity and alignment inside an organization.

One of the most entertaining elements of Joe Pine’s look at the “experience economy” was taking a few well-known examples. The gumball machine was one. There’s no functional purpose for the device—gumball delivery actually takes longer by this methodology. The device is essentially a slot machine for kids though, he said, which presents an exciting experience for them.

Following a morning of insightful presentations, AVEC attendees participated in workshops during the afternoon.

Following a morning of insightful presentations, AVEC attendees participated in workshops during the afternoon.

The examples served as a useful exercise that attendees were called upon to tap into during the afternoon workshops. Grouped together, participants were tasked with creating a specific exceptional experience and outlining all of the necessary elements of successfully implementing such a project. These were vibrant sessions to observe as many of the groups were very creative and laughter abounded.

The conference was capped off by a State of the Industry address from David Labuskes, InfoComm International executive director and CEO. Overall, the industry is in great shape by many metrics, yet there is considerable pressure behind the scenes that are making the industry a really challenging place to be. When increasing technical complexity, along with increased transparency in prices and margins are paired with new customer types and their different expectations, the industry becomes squeezed. As an association, InfoComm is in the midst of revamping its strategic plan, looking to define what success will be in 2019. Advancing industry awareness is part of the plan, as is presenting AV technology so it is not looked on as a commodity, but a strategic asset. Growing a more engaged membership, and not just looking at the numbers, will also play a larger role for InfoComm in the future.