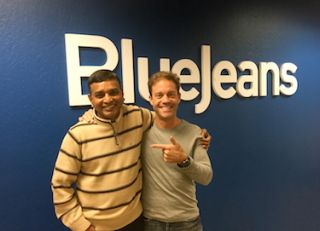 Krish Ramakrishnan and Mike Mansbach (left)Blue Jeans Network has appointed Mike Mansbach to the newly created position of president. Mansbach, an industry veteran, comes to Blue Jeans with a personal interest in its technology and how it affects its users.

“I’ve been a fan of video tech for some time,” said Mansbach.

Before joining the leadership of Blue Jeans, Mansbach was CEO of PunchTab, a software-as-a-service firm— recently acquired by Wal-Mart—that specializes in gamification, a practice of applying game design elements in non-game contexts to boost customer engagement. Previously, Mansbach spent almost 10 years at Citrix, a cloud computing and SaaS provider, as a leader of sales and business development in the SaaS division. His most notable achievement during this time was his role in launching GoToMeeting and GoToWebinar, a conferencing software solution many private and enterprise customers continue to use today.

This time around though, Mansbach’s goals will be slightly different. Blue Jeans differentiates itself with an emphasis on ease of use and its ability to bridge the gap between the various existing walled gardens of video conferencing that individuals and enterprises already use.

Mansbach’s appointment comes soon after Blue Jeans recent $76 million round of funding. Gearing up for a major expansion, Blue Jeans plans for Mansbach to take a pivotal role in guiding the firm through this new stage.

“We are embarking on a new and exciting chapter at Blue Jeans. Mike shares our vision and understands the value of real-time video and the power it has to transform the culture of the enterprise,” said Krish Ramakrishnan, CEO of Blue Jeans. “We are thrilled to welcome him as part of the Blue Jeans family.”