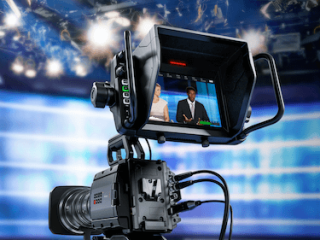 The large RGB tally light on the rear of the monitor lights up red when the camera is on-air and orange for ISO recording. In addition, it includes customizable clip-on numbers that can be inserted for easy camera identification from up to 20 feet away. When shooting a live event, it’s important to have physical buttons to quickly adjust settings on the fly. The Blackmagic URSA Studio Viewfinder features a physical dial, knobs, and three customizable function buttons that let camera operators quickly adjust brightness, contrast, and peaking without having to hunt through menus while live on air. The customizable function buttons can be used for zoom, false color, edge focus detection, loading 3D LUTs, and more.

The Blackmagic URSA Studio Viewfinder displays frame guides that can show the location of a lower third, graphic, logo or ticker so camera operators can accurately compose and frame shots. In addition to viewing the built in camera HDTV, 4:3, 2.4:1, 2.39:1, 1.85:1 and thirds frame guides, users can also create up to three black or white custom cursors that can have variable height, width, and position, making it simpler to match the location for all the graphics that will be added live or during later broadcast. When attached to URSA Mini, the camera sends information via the SDI connection to the viewfinder so customers can see the critical information they need such as recording status, camera settings, battery life and more while shooting.

The design of the Blackmagic URSA Studio Viewfinder should make it familiar to use for anyone that’s worked with other traditional studio cameras before, as the layout of the controls follows a common industry layout. The base of the viewfinder also features a standard V-lock bracket for mounting and detaching the monitor to the URSA Mini handle so it can be quickly set up and repositioned in seconds. This is especially important for camera operators at live events where they might need to set up the camera quickly or when they might want to quickly remove the viewfinder because the camera is going to be used with a shoulder mount.