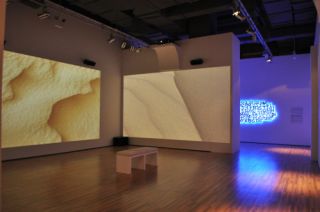 coolux technology to show sound sculptures
Bill Fontana chose the Sheikh Zayed bridge and the Abu Dhabi desert itself as the main focus of his work, after being commissioned to create two sound sculptures of local surroundings. Working with some of the UAE capital's young artistic talents for up to six months, he mentored and helped the young artists to create unique soundscapes that reflected powerful symbols and different sides of Abu Dhabi.

The Festival also commissioned the renowned local artist Mohammed Kazem to present his latest conceptual work, in addition to allowing the winner of the first Gulf Capital Abu Dhabi Festival Visual Arts award, Moza Obaid Al Suwaidi, to show creations that focused on the symbol of the palm tree.

The visual installations and sound sculptures were presented using audio visual technology, including the coolux Pandoras Box Compact Player, which was provided by TechnoPro LLC, the official coolux distributor in the Middle East.

A total of nine DVI Outputs had to be taken care of for the project. The Compact Players had to play out media to six Barco RLM-W8 projectors and three 50” LCD Monitors.

Each of the compact players was running independently and was able to provide smooth playback for looping QuickTime MOV files, with file sizes ranging from 70GB to 90GB each. The audio tracks were taken from each Compact Player and were then used for further sound processing. A laptop running VNC Remote was used to remotely monitor the status of the nine Compact Players off-site.