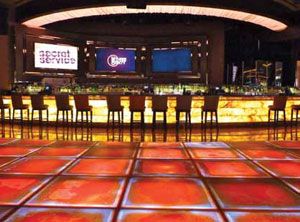 The House Doubles Down on AV at the Parx Casino

BENSALEM, PA—Parx Racing and Parx Casino, located just outside of Philadelphia, is a thoroughbred horse racetrack and 260,000-squarefoot casino that has more than 3,500 slot machines, along with e-tables and live table games such as roulette, blackjack, and poker.

Housed in a separate complex, the casino also includes a variety of dining and entertainment options, such as Foodies, Parx Grille, Club 360, Jax, and, most recently, Chickie’s and Pete’s, named “East Coast’s Leading Sports Bar” by ESPN.

Asked about the Parx Casino project, Production Technology Consultants Group president Nathan Powell recalled: “Parx was one of our first clients, and we’ve been working closely with them since 2005. When Pennsylvania approved the implementation of table games in its casinos, it brought new clientele to the facility, allowing them to expand to nearly twice their original size.

“So we’ve designed every AV system Parx has had since they received their gaming license,” Powell continued. “We started with a temporary casino within the grandstand area of the racetrack. Once that was up and operating, we started the design for the new casino complex.

The AV design was focused on sophisticated audio performance that matched the high-tech appeal of the facility. Powell chose JBL ceiling speakers “because we used them in the temporary facility and they worked well there. In fact, we bumped up the quality with JBL’s newest ceiling speakers.” The entire casino floor has been tuned so that it has full-frequency with added subwoofers. The management is pleased with this particular design.

Audio program material is comprised of the latest hits mixed with classic rock, Powell explained: “The general age of this particular casino is about 40 during the normal workdays. On Friday and Saturday nights, the younger crowds come in and make it a whole new experience.

The casino bar has multiple Middle Atlantic Slim-5 racks with steel side panels in the DJ/ control booth along with iPod docks.

“In terms of the video component, outdoors they have three very large screens and inside they have 52-, 72-, and 105-inch screens from Sharp, Panasonic, and Samsung with DL3 motorized video projectors. The installation also includes a Crestron automation system controlling a very large video switching system from Magenta and a BSS audio control system.”

In terms of racks, they looked at IT first, not AV. “For that,” Powell said, “they received Middle Atlantic’s custom ladder racks for the IDF rooms, which handle all of the distribution of the IT around the building.”

The most important overall consideration for the install was speed, because Greenwood Racing, the owner of Parx Casino and Racetrack, needed to open as soon as possible. “We concentrated on the specification of those custom ladder racks first, so that the IT department could come in and begin their implementation,” Powell said. “We chose Middle Atlantic to support AV, data, and security infrastructure for the casino, with over 100 racks, power and thermal management, cable management, shelves, and related rack accessories.”

The casino bar has multiple Middle Atlantic Slim-5 racks with steel side panels in the DJ/control booth along with iPod docks. The AV master rack room houses 30 racks for all the AV needs of the casino.