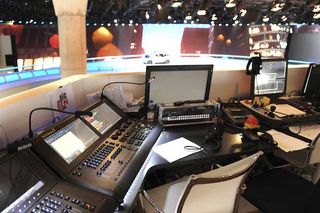 The creative process for the show began a year ago; the creative tender for the execution and technical management - including lighting design - was won by NIYU Media, and Kuhn was awarded the lighting design gig, along with a rough budget and guidelines. An important requirement for Kuhn's lighting design was to showcase the vehicles in motion, which would naturally require a sophisticated tracking system. Martin explains, "With a trade fair, you light the products and the architecture, and that is not exciting if it's static, with no movement or very little color. Our main challenge is to give the best possible daylight illumination for the vehicles. They must be very uniformly lit and there are many rules on how to do it. But BMW's display is unique in that they incorporate a huge track to show their vehicles in action. So the question there was how to best illuminate the track and cars. One way would be to simply light the entire track, which would be rather boring. So when they asked me what I was going to do differently; I told them I'm going to use a large rig of fast LED moving lights, and instead of trying to follow the fast pacing cars - which would end in a frenzy of movement - I will just dim the lights and change the color to complement them."

To track the moving vehicles, Martin chose the ZacTrack system by Australian manufacturer zKoor Technologies. "ZacTrack's system uses a small radio that can be placed on the car or a person," explains Martin. "While normally used to track performers on stage, it was perfect for our application. The radio uses two antennae that are practically invisible, and we used 20 of their receivers in the rig. It calculated the position of each car - to an accuracy within a few inches. That gave us the data of each radio."

Kuhn placed 504 Clay Paky K10s along the sides of the track at a distance of one meter each. He then added 131 Clay Paky QWO spots in the middle - placed every two meters - along with 70 wash lights in fixed positions. Martin says that while the lighting for the moving vehicles was covered, he found the lighting not to be precise enough when the cars came to a stop, so he added six to eight wash lights to properly highlight each of these scenes.

WIth fixtures and tracking capabilities in place, the next challenge was how do control the lighting; Kuhn's solution was as elegant as it was effective. "I was an operator once upon a time," he enthuses. "I started on the Hog II back in 1996, and I can still program - but others can do it much better, plus my clients want me to be a designer. But I still know the basics; I determined we should divide the track, as we didn't really need the accuracy of a few inches. So we divided the track in two meter sections, and now the tracking tells us that car number 3 is in Section 45. which would mean there is a OSC command saying 'Go Cue 45 in Cue List Number 3."

Each car on the track had its own cue list, so as vehicles entered the track, the system automatically detected their location. "If I was on Cue 45," says Martin, "we wanted Cue 46 to fade in, so we wrote a macro. When Cue 45 was triggered, we'd fade in Cue 46 in one second, then release the earlier Cue already behind the car. Because we knew which speed each car would drive, we were able to adjust these timings slightly for each car, then copy it approximately 134 times, and that was it!"

Although redundant backups were employed, the show was completely automated via time code. "On top of the OSC and everything sat time code," says Martin. "If the producers decided they wanted to see a particular show, the video would start - which would give us time code - and the color environment and mood on the entire stage and track would change. It sounds somewhat simple, but to be honest it was a challenge. With a show of this scale there was a lot of pressure and we had to exceed the expectations - we had to blow them away and we did."