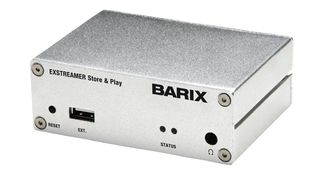 At the upcoming ISE 2017 in Amsterdam, Audio over IP company Barix will update its Audio Signage platform with free firmware to deliver multiple audio tracks to single- or multi-screen digital signage installations. Barix will exhibit at Stand 8-N270 in the RAI Exhibition and Conference Center from February 7-10.

The Barix Audio Signage platform helps businesses and visitor attractions deliver audio associated with digital signage to mobile phones over a local Wi-Fi connection. The firmware update will run on a standard Barix Exstreamer Store & Play unit as opposed to an expensive PC-based system that is complicated to manage. The firmware is available for download at www.barix.com/downloads.

The updated Barix Audio Signage solution works in situations where digital signage needs the additional boost of streamed audio to effectively deliver its message. Though previously simple and low-cost to support single-channel streams using the Barix Instreamer and a free Audio Signage mobile app, the second-generation Barix approach now solves the challenge of delivering multichannel streams as simply, quickly, and inexpensively as possible.

“Consider the case of a museum with three digital signage displays running, each with a unique audio track that is transmitted via Wi-Fi to mobile phone users,” said Reto Brader, vice president of sales and marketing, Barix. “The museum previously would have to buy and use a Linux PC to enable the delivery of channel information to the mobile app, in order to give access to all three audio streams via Wi-Fi, costing a minimum of $1,000. Now, all they need is an Exstreamer Store & Play loaded with the new, free ‘Barix Audio Signage Info Server’ firmware. With this new approach, the museum can provide multichannel support for around $300 per installation, and will no longer require a PC in the system, greatly enhancing robustness and reliability.”

Barix Audio Signage is purpose-built to deliver audio streaming to mobile phones with very low latency, enabling audio tracks to synchronize with digital signage content, and is well suited for use in hotels and museums that using digital signage.

Brader noted that the key challenge in deploying audio signage lies in the network configuration and Wi-Fi environment on location. He adds that given the straightforward nature of the Audio Signage platform, systems integrators can easily test and evaluate a facility’s network to ensure that Audio Signage works on the network’s current configuration, or whether its Wi-Fi capability requires strengthening.

“The beauty about the second-generation Barix Audio Signage approach is that the solution relies on Barix hardware that is very robust, easy to set up, and exceptionally reliable,” Brader said. “All a client has to do is to purchase our hardware devices—in this case, a Barix Instreamer for each channel, and a Barix Exstreamer Store & Play to support multi-channel implementations. The firmware is downloadable to these devices, and the multichannel audio streaming service is ready to go. On the display of the mobile phone receiving the signals, the consumer simply clicks on the title of the stream they want to listen to, and the connection is made.”