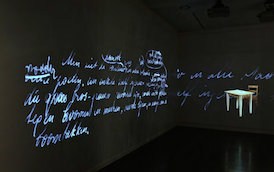 More than a hundred BrightSign-powered interactive video screens have been installed as part of major refurbishment at the Netherlands Literary and Documentation Museum in The Hague. Bringing to life the stories of Dutch and Flemish authors and poets In the Pantheon gallery, an audio-visual wall of fame features 100 literary figures from 1000 years of history. Eight large-scale video projected displays are driven by HD1010s display on walls alongside exhibits in the “Writer’s Pantheon”. Interactive media players with touch screen are built in, along with audio headsets, which allow visitors to watch related movies and plays, and listen to famous poems or prose readings.“One reason sound isn’t used often in digital signage” commented Tom Nix, the CEO of digital content management software provider, Scala, “is because the content broadcasted to a wide audience is ill timed, repetitive and not always contextual. This can be perceived as audio spam or annoying to the people who work in the environments where sound is used. Saying something meaningful, contextual and relevant is always better than just being heard. Perhaps I pick up a Nikon DSLR while browsing, at that moment I would be receptive to a “real” expert video message speaking to me about the attributes of such a costly purchase. We have seen targeted, personalized audio tied to triggers effectively provide a strong level of engagement.”

“Indeed, most digital display operates without audio for the sake of frequent replay annoyance, noise pollution or ambiance disruption,” echoed digital signage industry consultant Lyle Bunn. “Audio that is contextual such as the talking head of a leader or presenter, or music does work well. Talking is well suited to staff communications networks and a presenter of “how to” information in for example, a medical waiting area. Last year a DIGI Award recognized the significant success of a Gillette in-store promotional ad in which disposable razors hung on a clothes line moved to a simple Jingle Bells rendition. The audio was relevant to the Christmas season and its repetition was accepted to staff while adding to the shopper’s experience.”

“In retail it is such a struggle”, said Richard Ventura, Vice President of Business Development and Solutions at NEC Display Solutions of Americas. “Small stores definitely run the risk of noise bleed. Directional audio has gotten better with companies out there like Brown Innovation making these systems. I think a major reason we aren’t seeing it has less to do though with issues like bleed and more to do with who is deploying the systems. A large percentage of the companies deploying DS do not have experiences with audio. Also there is not a lot of content being designed with audio in mind. The CMS companies can handle it but not having it built into the content is an issue. And when they do it a majority are just doing music. So when that happens you are competing with the audio systems within the retail and/or business environment. Also companies are focused so heavily on the visual experience and forgetting the importance of the audio experience. “

Bu there is in fact more audio out there in digital signage than you think– and there is more coming.

"Yes, there is absolutely a trend toward audio in digital signage,” said Lance Glasser, President and CEO of AudioEverywhere. “Of course children should be “seen and not heard” until they learn proper manners. With Digital Signage the concept is similar. When it was a new technology, audio received a bad reputation because it would drive those in stores crazy listening to the same messaging repeatedly.

Today, audio in digital signage has grown up and has good manners. Opt-in audio means not as many consumers may hear something, but for those that do, statistics can be collected and a click through with a coupon or other sales driver can be included to provide additional value."

In a discussion on this topic with Jeff Collard of Omnivex– also a digital signage content management software provider– Jeff pointed out “Audio requirements in digital signage are application-specific. In large open areas, audio may not be practical and although directional speakers are available, the acoustics of many installations undermine audio delivery.” Jeff feels that “there are areas where audio will be an important component but they are the minority and probably less popular than 10 years ago.” Jeff is right, and as we stated earlier, digital signage is a “mostly” visual medium but he is also quick to see applications where audio plays an important role.

In that regard, keep in mind that digital signage plays multiple roles not the least of which is as a behavior modification tool and secondly as a means to enhance not only the viewer experience, but improve the environment around the digital signage display as well. In an overall sense, audio has proven to be a great means to enhance emotions and promote calls to action. A simple example outside the realm of digital signage is a GPS on your dash. It shows you where to go and tells you where to go and what to do. When the audio component was added to GPS devices a few years back, sales went up and satisfaction improved significantly. Display companies have found that as they improved the audio experience, display sales increased more than with any other feature improvement. At its best, audio coupled with video is a veritable match made in heaven but getting there is the secret and in digital signage it is sometimes a difficult path and perhaps not appropriate or even possible.

Jeff Collard suggests a few applications where the inclusion of audio is appropriate. “In arts, entertainment and recreation sector, we often need to deliver an overall experience where audible plays a significant role to create an environment for people. The toughest challenge for these installations is acoustics, the walls, ceilings and floors can make or break the experience and building the right environment can be very expensive.” He notes that, “Another big area for audio is any display that caters to people with disabilities. Wayfinding in public spaces may require support for the visually impaired. People with partial vision can get general information from a screen but can’t read detail. Audible instructions help them identify key navigation points. Kiosks focus on one to one communication, so audio is often a component.” Being a CMS kind of guy he pointed out that audio “in transportation, is triggered by locations to indicate that we are coming up to a stop or point of interest. The screen usually changes based on the same location trigger.”

Rich Ventura of NEC adds that “Kiosks with audio on demand seem to be gathering more attention. It is a much cleaner look and feel than just placing a speaker next to a display.”

Ventura pointed out that one his favorite digital signage solutions is the rollout in the retail store, Cabelas.

“Cabelas is using digital signage, with audio, in front of their taxidermy mountain. This is an interactive kiosk where you can select an animal and play an audio file of the noises they make. The screeches, barks, and noises are immersive and really bring the animals to life. It is such a great experience. I went into a store in Minnesota recently and watched the kids and adults interacting with this. Very impactful.”

Jeff Hastings, CEO of BrightSign said that they “are seeing more commercial audio being integrated into digital signage to have a more immersive experience, especially in retail, hospitality and museums. At Brightsign we've just launched a new commercial audio device, the LS322 with S/PDIF digital audio specifically for this purpose.”

Hastings added that BrightSign media players power many audio for digital signage applications, such as retail sound bar and speaker demonstrations in stores like Best Buy and Target and Walmart, as well as many interesting museum applications around the world.

“Just mounting a screen, speakers and looping a handful of clips isn’t likely going to be a success in any vertical market,” said Paul Schwantes, Digital Signage Sales Engineer at CastNET (a division of Alpha Video & Audio, Inc.). “Careful planning, and working with the right experienced vendor and content designers however can lead to major success, return on investments, and return on objectives. CastNET has deployed networks in markets that leverage audio as a very important component of the network, but utilize a content strategy where the audio is not part of an endless loop. Casino Gaming floors are leveraging IPTV Television and Digital Signage to entertain guests, promote their on-property restaurants, and show the large variety of services and amenities that are available to their guests. A casino’s gaming floor is FULL of all sorts of noise, so a majority of the time the signage content is visual only (no audio). But an additional, and major, piece of the digital signage content strategy is also to ‘Enhance the feeling of luck and winning.’ To accomplish this, the signage systems are interfaced into the property’s Slot Machine management system, monitoring for Jackpots. If the jackpot exceeds threshold amounts (controllable by casino owners) the playlist loop is interrupted by a software trigger. This is often referred as ‘Floor Wide Celebrations’. The onscreen content for this celebration is of exciting animations with elements of coins or dollars falling, firework animations, etc. and the related audio of loud coins jingling, people cheering, etc. to enhance that moment and get everyone’s attention.

One interesting point that Jeff Collard made was that “audio is less popular than 10 years ago”. But all that means is that ten years ago there was a huge surge as the industry was finding its way (pun intended) to add audio to anything we could. For those of us who have been around for a while we know about being a pioneer and the proverbial arrows in the back that were encountered, many of which were noted earlier in this article. Trial and error was the rule of the day back then and along the way we found out where audio was appropriate and where it is not. In a sense it is like “right sizing: a company to fit a market, we have “right sized audio” to fit applications where it works well.

If you think about it, with audio it is all about control and intelligibility at least as far a digital signage is concerned. With the development of newer technologies to control audio in a given environment, we are seeing growth in certain vertical markets. On technical side, if you want audio to not "bleed" in all directions, it's easy, just cut out almost all bass frequencies. Audio 101: long waves (bass) bleed; short waves (treble) are very directional and can be "aimed".

A subsidiary of the Turtle Beach Company called HyperSound is a good example of what can be done. As shown in the graphic below, their technology directs and focuses the sound to keep it contained in the zone of a viewer. In a recent rollout in the Best Buy stores for a big video gaming company they proved the concept works. In fact if you go near the display, you actually get a stereo effect with a left ear/right ear experience. This is proving to increase dwell time at the display and enhance the viewer experience. In short, the best of all worlds. We also know of several more projects in the pipeline that will use HyperSound but the point is that technologies like this can and do work.