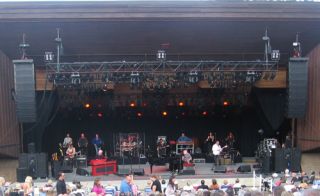 Most recently, the 1100-LFC has been specified for a forthcoming resident Cirque du Soleil production. This is the 1100-LFC’s first Las Vegas installation, featuring a MILO, MICA, and M’elodie line array loudspeaker-based sound system specified by sound designer Jonathan Deans.

Deans recalls the first time he heard the 1100-LFC: “I was standing about 15 feet away and, as the 1100-LFC reproduced the low frequencies, my stomach and clothes jumped to the rhythm of the music. At both high and low SPLs, instead of hearing the usual straining of components, I heard a very musical sound with the dynamic depth of the instruments.”

The 1100-LFC has also been added to Big Thrill Productions’ inventory, and has proven to be a useful low-frequency companion to their M’elodie line array loudspeaker systems in churches and small theatres.

“Some people might think the 1100-LFC is too powerful to go with M’elodies, but we feel it’s a complement to a smaller line array,” says Shaun Bennett, vice president and COO of Big Thrill. “We’ve found that the 1100-LFC is more than just a sub. It generates feeling and energy without being overpowering.”

George Relles of Eugene, Ore.-based George Relles Sound was one of the first companies to deploy the 1100-LFC with a MICA system. “The 1100-LFC is highly powerful,” Relles says. “I never saw a limit light come on during the entire summer.”