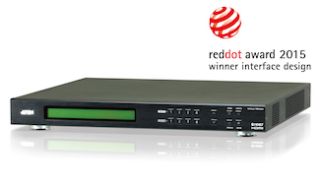 VM3404H, by ATEN
The What: The VM3404H and VM3909H from ATEN International extend uncompressed video, audio, power, and control via HDBaseT-Lite through a single LAN cable up to 70 meters.

The VM3404H and VM3909H offer flexibility through their choice of control methods, such as front-panel pushbuttons, IR channel ports, RS-232, and Ethernet (Telnet/Web GUI) connections. Bi-directional IR channel ports support control of AV sources locally at the switch or remotely at the display. The Ethernet connectivity makes it easier for installers to create a cable infrastructure in situations where displays are scattered, such as in digital signage applications.

VM3909H, by ATENThe Bottom Line: ATEN’s HDMI HDBaseT-Lite Matrix Switches support a variety of applications including luxury residential uses such as home entertainment rooms, commercial and conference center uses including digital signage and video walls and control room use such as extending video to individual monitors or video wall setups.