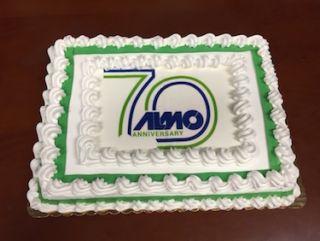 On March 9th, the official 70th Anniversary Kick-Off took place at Almo Corporate Headquarters in Philadelphia, PA. The Chaikens family and the families of Almo employees were joined by city councilman Brian O’Neill for the ceremony and cake cutting. Councilman O’Neill presented Gene Chaiken with a Philadelphia City Council Citation honoring Almo’s commitment to the City.

“The only reason you’re all here today is because on July 4th, 1959 Roz said yes to going out with me”, Joked Chairman of the Board Gene Chaiken. After getting married, he began working for Almo (his father in law’s company) in 1963, succeeded his father-in-law in 1973, and has led the company through 43 years of remarkable growth and diversification. “We continue to be successful because this is a we and us company, not an I and me company. We look forward to many more anniversaries to come.”

In honor of the city that provided it roots and enabled it to thrive, Almo has sponsored the planting of seventy trees at parks city-wide through Philadelphia’s Fairmount Park Conservancy. Trees will be distributed and planted during Philadelphia’s Love Your Park weeks in both May and November of 2016. Almo’s sponsorship of the tree planting will be honored during the spring Love Your Park Week opening ceremony May 9th at 9:00am in Pleasant Hill Park. Sponsors and city officials will be on-hand to launch the weeklong event and plant the first of the Almo sponsored trees within the new park.

The celebration will continue this summer when Almo will host employee appreciation events at each of its 10 locations nationwide. Almo employees in Long Island, Baltimore, Columbus, Atlanta, Tampa, Dallas, Milwaukee, St. Louis, Reno, and Philadelphia will gather together to mark the occasion with food, fun and commemorative gifts.

Founded in 1946 in Olde City Philadelphia, Almo Corporation has grown from a single storefront to a national billion-dollar organization. Almo is a 3rd generation family owned business, led today by 2nd generation owner and company chairman, Gene Chaiken, and 3rd generation owner Warren Chaiken, who is president and CEO. Known for its logistical capabilities, Almo serves as the sales and fulfillment supplier to many of the largest manufacturers in the world, delivering products to retailers both large and small across the country. By diversifying into a wide range of markets while remaining true to their strengths, Almo has been able to experience significant growth and today its 450+ employees serve over 100 brands.