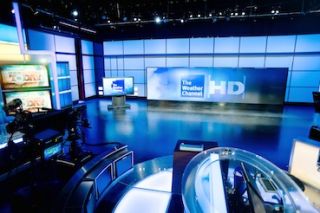 The new system, comprised of 12 Christie Entero LED-illuminated rear-projection display cubes, is now seen as a backdrop for on-air talent and is a vehicle for live video and map presentations.

“In 2008, we supplied a rear-screen projection edge-blended system with Christie projectors,” said Electrosonic systems consultant, Pete Rajcula. “We have an ongoing relationship with The Weather Channel, and when they were looking for a new alternative to the blended system, we suggested Christie’s LED-illuminated DLP cubes, which offer extremely long lamp life, rich color and easy maintenance.”

Rajcula notes that while the former system was state-of-the-art at the time, LED-illuminated cubes have now reached maturity in the market, allowing the Weather Channel to reap the benefits of the technology.

The installation was challenged by the need to do the work on a fully functioning set. Electrosonic installed the wall’s pedestal and cubes, adjusted the geometry and color balanced the screens to match the studio lighting.

The video wall is designed in a 2x6 configuration with dimensions measuring 26.9 feet wide by 6.8 feet high. A three-output Vista Spyder image processor drives a trio of 1-in/4-out distribution amps. Each of the DAs, in turn, drives one of three 2x2 sections of the wall. The video wall does its own processing of each 2x2 section, creating one large dynamic image across the display.