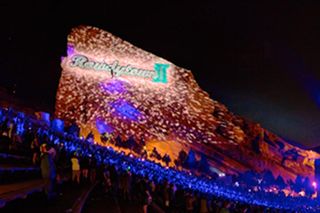 Where the Great Plains meet the Rocky Mountains, a geological phenomenon known as “Red Rocks” emerges as the only naturally-occurring, acoustically perfect amphitheater in the world. Serving as the stage for Rowdytown II, an Electronic Dance Music festival produced by Big Gigantic and Ghost Pixel, it provided an innovative backdrop for the biggest and brightest 3D projection mapping ever held at the venue.

Load-in and set-up were extremely challenging. Red Rocks staff utilized a mechanical system comprising a chain hoist and custom-built aluminum sled to transport equipment up the inclined seating area. Without it, a crane would have been required to place the 500 lb projectors hundreds of feet from the top or bottom of the venue.

Live-Online president Dave Jensen describes the technical feat: “It took six stagehands and two projectionists about five hours to place projectors and run signal/power from FOH. The projectionists started converging as the sun went down to provide as much testing time to the designers as possible. With only one night for set-up and testing, we simply converged images rather than blending them. Since our canvas was comprised of rocks and small bushes, the loss in resolution wasn’t a concern.”

Five Barco HDQ-2K40 projectors with 1:1 lenses were used on the largest projected area, 200' x 500', once masked to follow the rocks, while two HDQ units covered the 150’ x 250’ area. “Even with full stage light, onstage LED and strobes, the images were clearly visible and complimented the show perfectly,” comments Jensen.