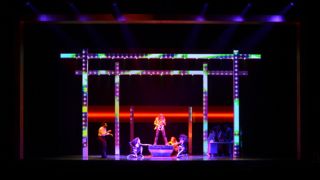 “We were tasked with supplying a cost-effective technology that could accurately track up to 26 axes of automation system movement. That’s a considerable number, which included simultaneous x, y, and z axis tracking on multiple surfaces on multiple planes,” said WorldStage account executive Lars Pedersen. “We’ve done similar jobs using other systems in the past, but nothing to the extent of what we had to manage for this job.”

Since the designer, Daniel Brodie is very familiar with the Watchout graphics platform, WorldStage decided to move forward with a Watchout-based system, even though it hasn’t been used for automation tracking on a Broadway production. “Although we’re versed in the inherent capabilities and feature set of Watchout, this would be the first time we’ve used it to facilitate automation tracking,” Pedersen said.

Working with the team from Hudson Scenic, the decision was made to implement a “software” solution to facilitate direct communications between the automation and the video systems. The main component in the system was the Coolux Widget Designer PRO software, which enabled the Watchout computers to interpolate and manage the position information being output from the automation computers.

Dual-converged Christie Roadster HD18K projectors were selected for brightness and redundancy purposes. In fact, Projection Designer Daniel Brodie of brodiegraphics explains that the projectors are primarily used as a lighting source, which track the movement of the set pieces. “We can track more accurately with the projectors than we can with lighting instruments. We worked with lighting designer Natasha Katz to project color to match the lighting design, whether naturalistic or abstract.”

Brodie also maps animation and video to the set pieces. “Some content is purely evocative: flashing colors and video – psychedelic or kaleidoscopic – to support a musical number. Sometimes we play back a scene from ‘Lady Sings The Blues’ that we reshot with our actors; we also display documentary footage of 1968 events to accompany the song ‘Ball of Confusion.’ And sometimes we use just standard projection design for dates, names and titles.”

The show marked another first in using WATCHOUT’s built-in stereoscopic 3D capabilities to align the projectors on multiple planes. “We discovered that we could do 3D effects during shop prep at WorldStage, and they’ve worked perfectly,” Brodie reports.