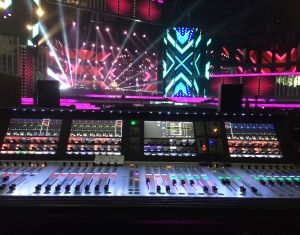 Part of the setup of HARMAN-powered sound reinforcement system.
Acoutech deployed a pair of Soundcraft Vi3000 digital mixing consoles, one for the FOH music mixing and one for monitor mixing. The FOH board featured 96 inputs, while the monitor console drove 16 stage mixes, plus another eight stereo hardwired in-ear mixes over MADI. In addition, Soundcraft Stageboxes fed 16 stereo wireless in-ear monitors.

“The two Soundcraft consoles shared the same I/O so we were able to distribute and manage all the signals between the consoles and the production and music trucks,” said AJ Perez, President of Acoutech.