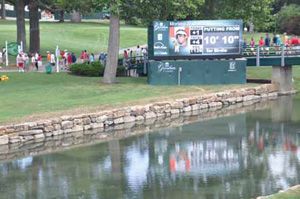 In White Sulphur Springs, WV, the Greenbrier Resort has held its yearly Classic PGA tournament since 1979. Each year, the coverage gets more technically complex, which allows spectators to get full coverage of the event no matter where they are on the resort’s course. This past July, Pottstown, PA’s Upstage Video handled video for the 2010 event, employing large LED displays throughout the course.

Upstage was charged with providing live LED display coverage of the event at remote locations throughout the course, as well as supplying live scoring info with graphics. “We created a computer-based graphic output of 1920x1080, and we fed that into a Folsom Image Pro HD to equate a full-screen display,” Christian Mathews, project manager for Upstage Video, explains. “On the 17th green, we fed video into a 15x40 Daktronics PST12HD LED wall that looks insanely vivid in the sun. We also had a split-screen configuration that allowed us to do half graphics and half live TV on the same screen. On the 18th green, we fed video into our brand-new Barco C8 tiles, which we situated into a 9x24 tile setup. That screen was the perfect product for the job — it went up quickly and the resolution was stunning.”

To keep a handle on all the video feeds, Upstage used a mix of computer control with external gear. “We primarily used Apple computers that placed dynamic graphics into the feed,” says Matthews. “We also had another Windows PC running Scala software for the scheduled content loop, and some NewTek Tricasters for the live TV feed with graphic overlay. This all went into Folsom Image Pro HDs, which then fed into the Contemporary Research QMOD. We had two of these chains set up, one for each screen.”

In addition to the main feeds, Upstage was able to provide several other services using the QMODs. “The other consideration that was a no-brainer for us was that we could use the QMODs to produce CCTV channels for our event clients, which is also another service that we offer,” Matthews explains. “We specialize in providing turnkey video solutions to sports and concert events, and that includes creating digital signage channels, live video for TVS, big screens, and web streaming. A lot of guys look at a piece of gear and all they see is the solution that is marketed to them. We try to buy gear that provides endless solutions, and the QMOD just keeps fitting in. Coax is cheap, and it still delivers a pristine signal when used properly. That equates to happy clients, pretty pictures, and more money in our pockets.”

In the end, the project was a huge success, and Matthews equates that to having the right products for any situation.