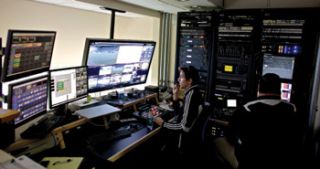 Professional video and audio systems integration firm Advanced Broadcast Solutions (ABS) restructured the in-house video production control room at JELD-WEN Field in Portland, OR, for the Portland Timbers Major League Soccer team. The two-day project was completed in time for the team’s season opener against the Philadelphia Union in the Spring.

Recently redesigned by ABS, the control room at JELD-WEN Field has helped enhance in-stadium video presentation programming for the Portland Timbers.The home field for the Timbers soccer and Portland State University Vikings football, JELD-WEN Field is an outdoor stadium that opened in 1926 and seats about 20,400. Over the years, the facility has had several major renovations. Part of the 2010-2011 renovation included the installation of a 37x20-foot HD video board at the south end of the stadium and an upgrade of the control room, which is housed in a small, two-level portion of the press box.

Jennifer Smoral, director, events and promotions for the Portland Timbers, said the control room was renovated before the 2011 MLS season. “We ran a really good show and everything worked,” she explained, “but we came to realize quickly there could be a more efficient setup. We are pleased now that we are able to produce an even better in-game experience for our fans.”

To improve their game day workflow (and add fiber connectivity for stadium cameras, which had not been done in 2011), the Timbers hired ABS. Rather than start from scratch or install all new systems, ABS kept costs down by reengineering the existing workspace.

The control room redesign included a variety of updates, including moving the audio operator (and a compact mixer) into the lower part of the control room. Positioned between the PA announcer and scoreboard operator, the audio operator now serves a producer role during games as well. Meanwhile, the video content workstations— including technical director, graphics generator/LED operator, and replay operator—were re-clustered together on the second level.

ABS also provided new fiber connectivity to the control room, which upgraded the camera locations around the stadium to HD. During a match, the production team has access to up to eight cameras to cover promotions and game action.

Smoral said ABS worked efficiently and was able to “translate” highly technical terminology so it was easy to understand. “They listened to our comments without trying to sell us something we didn’t need,” she added.

As a result of ABS’s work, Smoral said the team is able to provide an enhanced on-screen product for its fans. Plus, the new configuration has improved the production workflow and reduced manpower requirements. “Communication is much easier,” Smoral said. “We work smarter, not harder.”

The Result:
“We ran a really good show and everything worked, but we came to realize quickly there could be a more efficient setup. We are pleased now that we are able to produce an even better in-game experience for our fans.”
—Jennifer Smoral, director, events and promotions, Portland Timbers