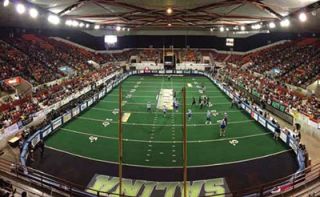 “Global Spectrum, L-Acoustics, and Parkway Communications did a super job of quickly getting a high-quality sound system for the Bicentennial Center ordered, installed, and ready for prime time,” said the City of Salina’s city manager, Jason Gage. “This system is second to none and provides the facility’s patrons with an unforgettable audio experience.”

“New sound and lights are going a long way for our fans, clients, and internal operations,” added Global Spectrum’s Chris Bird. “Our fans are now able to see and hear events better than ever before, and our clients are able to present a higher quality product. It’s a ‘win-win’ for all involved with the Salina Bicentennial Center.”

Prior to the much-needed sonic upgrade, the Bicentennial Center utilized an exploded cluster system located at one end of the arena that was simply not up to current standards. When the city agreed to a full audio redo, provided it didn’t stray from a strict municipal budget, the L-Acoustics Applications team got to work designing a system that was big on performance without busting the budget.

“L-Acoustics was one of a number of loudspeaker manufacturers who submitted system concepts for consideration and we were extremely honored to have been selected as the sound system provider for Bicentennial Center,” said Dan Palmer, L-Acoustics’ national manager of installation projects. “Having successfully placed ARCS WIFO systems most recently at San Antonio’s Freeman Coliseum, Miami’s BankUnited Center, and Phoenix’s Grand Canyon University, we have a growing body of experience in municipal and professional sports arenas and know how to effectively address them with L-Acoustics solutions.”

“Since we have had a good deal of experience with all of L-Acoustics’ product lines—especially the ARCS WIFO systems—we knew exactly what it would take from an integration standpoint to help this system really perform to its full potential,” stated Parkway’s Josh Maichele, the systems engineer on the project. “We wanted to make sure from the very start that we were getting every ounce of signal we could to the speakers and no detail was left out, from the eight-gauge wire feeding the clusters to input and output from the booth or floor being transported via AES audio.”

The new rig incorporates 28 ARCS WIDE systems flown in four arrays of four cabinets for the north/south ends of the arena, plus two cabinets for the west end and four corner positions. The east-facing array pairs an ARCS FOCUS with two ARCS WIDE, while six SB18i subs and four LA8 and one LA4 amplified controllers round out the system.

Additionally, a portable “floor” system consists of four ARCS WIDE tops mounted on poles above four SB18 subs. The flexibility provided by this portable system was key to the job’s success as it can also be deployed as separate point sources on tripods, or as a flown left/right system above a portable stage as dictated by the event. A pair of LA8s powers the portable system.

“Flexibility and functionality were key, and the ARCS WIFO system can accomplish all of this with standard rigging,” Palmer noted. “The system provides articulate, full-range, high-impact sound to all audience listening areas.”