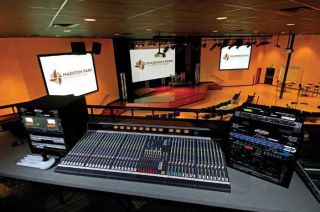 AVI-SPL’s installation at the Madison Park Church of God in Anderson, IN includes ceiling-suspended projectors displaying images on 120- x 60-inch Draper Onyx screens. The choir makes use of an additional projector and screen on the back wall as a monitor.

As aspect ratios grow wider and projected images take on new shapes, the integration of large-venue projectors into commercial venues, corporate boardrooms, educational facilities, houses of worship, and other environments is becoming a more frequent, and demanding, task. At the same time, however, lingering economic sluggishness and uncertainty have brought on austerity and a new attention to total cost of ownership.

To address the complexities, logistics, and costs of large-venue integration, manufacturers are offering new tools and features to both simplify the process and deliver greater access and control. Along with longer lamp life, these enhancements to service and feature set, say manufacturers, can deliver new markets and increased margins to systems integrators. Meanwhile, LED lamps offer considerably longer lifespan, impacting the total cost of ownership and offering great, if not necessarily imminent, promise to large-format projection.

Large-venue projectors, explained James Chan, director of product marketing for Mitsubishi Digital Electronics America’s Presentations Products division, “used to be almost exclusively ‘boutique’ type projectors where the volume was small, the opportunities not as plentiful as the hang-and-bang installations in the education market. However, large-venue projectors always bring in projects that net the most revenue and margin for an integrator.”

Historically, larger-venue projectors were challenging, agreed Sam Malik, VP/GM of the Presentation Technologies Group in Sanyo North America’s Consumer Solutions division. “They were very complex. It took that guy, the ‘programmer guy,’ to set it up and install it.”

Today, for a number of reasons, integrators can think big. The realtime analysis provided by Digital Projection’s online Calculator Toolbox, stated marketing communications manager Michael Bridwell, affords dealers and integrators the confidence to take on large-venue projection projects. “There’s really no margin of error when it comes to large-venue projection: it either works or it doesn’t,” Bridwell asserted. “For those that would normally shy away from these largevenue installations because they’re so critical, this gives them a tremendous amount of comfort.”

The Digital Projection Calculator Toolbox, he explained, allows the integrator to determine the optimum model based on parameters including screen width, image size, and ambient light. “Then they can select a projector and a lens that will achieve the image size they’re looking for, and produce a dynamic report right then and there.”

Such tools are in regular use, observed AVI-SPL senior design engineer Dick Tollberg. “In the old days, the manufacturers gave you projection formulas and you ended up having to figure it out yourself,” Tollberg said. “Today, we use the manufacturer online calculating tools all the time to calculate image size and projection distance. There is no question that it is easier for integrators to use than the old calculations.”

The recession and lingering economic disquietude, said Malik, has brought a particularly heightened state of total cost of ownership awareness to end users across every sector. “We started work on this three or four years ago,” he recalled, “integrating how we lower the cost of ownership overall in our products. A lot of people took quick action on the sub-$1,000 school classroom-type models, but now it’s pointed at ‘How do we handle that on the higher level as well?’”

One way, Malik offered, is Sanyo’s Active Maintenance Filter (AMF) system, comprised of 10 filter rolls in a single cartridge. “It senses airflow,” Malik illustrated. “If it finds that it is clogged or not getting the amount of airflow that we programmed it for, it automatically advances the filter to the next clean filter area. You don’t have to climb up the ladder and clean or wash the filters; the filters last about the same life as the lamp, so when you change a lamp, you change the filter cartridge and you’re set. It’s programmable, and makes maintenance a lot easier overall.”

“Longer lamp life is where current technology appears to have advanced more than anything else,” Tollberg noted. “Generally, lamp failure is the most prevalent issue with a nonworking projector.”

Longer lamp life also ties in with the “green AV” trend, which is itself growing in prominence. “Just like most other things in life these days,” Chan said, “projectors are turning greener. Smart integrators and consultants are recognizing the effort of every level in the design-build food chain in trying to be eco-friendlier. Mitsubishi’s new dual-lamp projectors, for example, have a reusable, self-cleaning filter that can last much, much longer than conventional filters yet do not fill up the landfill.”

Advances in lamp technology and lighting devices, Chan added, also mean that “mass-market brands are starting to offer projectors that come with brightness in the realm of what was once exclusively in the boutique category of large-venue projectors.” Thus, he added, “the growth opportunity in the large-venue projector market lies with shrewd integrators and consultants who recognize the advancement of these mass-market brands and take advantage of this reality to recommend and spec them into projects that were placed on the back burner,” due to budgetary concerns.

Sanyo’s PJ Network Manager software delivers lower a total cost of ownership by monitoring lamp life. “In the past, it was pretty difficult working on higher-end or higher-venue things,” Malik said. “They were pretty technical and didn’t provide easy access as far as programming the units, calibrating, and setting them up to get optimum color, or organizing them to fit the screen. They certainly didn’t give you a lot of feedback and control. Our PJ Net management system gives that flexibility, so rather than having to climb up on a ladder to do maintenance, or trying to do programming off a keypad built into the side of the projector, you can do this from your PC and, in some cases, even your smartphone.”

At the Boston College campus, for example, “at the end of the school day, all projectors shut down at 6:30 p.m., especially on a Friday, so that these projectors and lamps don’t just run all weekend long, which lowers the life of the product overall,” Malik explained. “It helps the lamps last a lot longer, because they’re not just running with a blue screen up.”

LED projectors, say manufacturers and integrators, will revolutionize the projector market—in time. “The LED light engine appears to hold an awful lot of promise,” Tollberg said. “Certainly from the standpoint of consumables or replacement items that projectors require over the life of the unit, the LEDs will last as long or longer than the projectors themselves. That’s very, very promising, but the LEDs still aren’t there yet as far as being equally bright as existing lamp technology.”

“LED projectors are not highlumen projectors at this point,” Bridwell agreed. “They create an intense amount of light, but there’s a bit of an issue getting all that light directed straight through the lens where you want it to go. That is the only Achilles heel to LED projection—trying to concentrate the diode light through the lens in a direct line where you need it to go.”

Otherwise, he added, “LED projection is absolutely going to turn the entire projector market on its ear, especially lower-cost projectors. The reasons are numerous. Lamp replacement cost for projectors is pretty ridiculous: You can buy a projector for $1,100 nowadays, and over the course of three years, you’ve probably paid double the cost of the projector just in lamp replacement.

“As far as [LED] lifespan,” Bridwell continued, “no one has actually allowed these diodes to run their entire course of life. The reason is they’re so ridiculously consistent. We rate our M-Vision LED at 60,000-plus hours of diode life. That’s an exact mathematical estimation made on the fact that we’ve had diodes running in projectors 24/7 for years now and have not been able to exhaust them. You can imagine what that does for an installation: you have literally zero maintenance cost on the light. Installers love that, obviously.”

The rental and staging market, where the lengthy economic malaise discouraged investment, is a growth opportunity for large projectors, Malik observed. “Over the course of the recession, those guys didn’t buy any new equipment,” he noted. “They just re-lamped what they had, cleaned it out and kept beating it up on the road. So the big growth area we’re seeing right now is this rental and staging market that is asking, ‘What’s the new product, because we’re ready to renew.’”

Christopher Walsh (chrisink@live.com) is a New York-based journalist, musician and recording engineer. He has covered music and professional audio for publications including Billboard, Pro Sound News, and Pro Audio Review for 13 years.

An RGB Spectrum MediaWall 2500 allows a 30- x 10-foot edge-blended video wall to be filled with one or many programs.

AIRWAY HEIGHTS, WA—The largest sports bar visual display in the Pacific Northwest is one of the popular attractions at the Northern Quest Resort & Casino. Located a few miles west of Spokane, in the City of Airway Heights, WA, the facility is a major attraction for entertainment, dining and gaming. A recent expansion of the facility include includes a beautiful 250 room hotel, 14,000 square foot spa and salon, and The Q sports bar that boasts a 30- x 10-foot edgeblended video wall. Any and all major sporting events displayed on the larger-than-life HDTV gets viewers’ blood pumping as if they were at the event in person.

RGB Spectrum technology partner Avidex integrated the video wall and its supporting technology. According to Michael Clark, Avidex’s executive vice president, “RGB Spectrum’s products were a natural selection for this high-profile installation due to their quality, ease of installation and maintenance, but most importantly due to their superb handling of a diverse array of high-definition video signals.”

The casino wanted a presentation system that would be an attraction unto itself, with the flexibility to fill the screen with one or many programs. “The RGB MediaWall 2500 was a perfect match, able to display up to eight HD and eight video program sources at a time, chosen from standard definition composite video or analog RGB and digital DVI signals at standard or high-definition,” added Scott Norder, RGB Spectrum’s vice president of marketing. Images can be displayed anywhere, any size, in correct aspect ratio or stretched to fit, in whole or zoomed to emphasize details. The MediaWall provides the necessary signal overlap for edge blending between two Panasonic PT DW10000U 10,000 lumen high-definition projectors to create a seamless display.

Aaron Fischer, executive director of IT for Kalispel Tribes Economic Authority, the owners of the Northern Quest Casino, said, “The end result achieved through the use of the MediaWall 2500 paired with Panasonic projectors is the highest resolution and largest display in any sports bar in the Pacific Northwest. The owners have been highly satisfied with this marquee feature of The Q.”