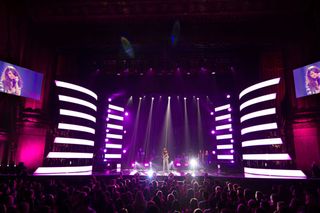 Kenny – never shy of taking creative risks - has a penchant for using new technologies in his range of work, and jumped at the chance to be the first LD in America to get hands-on with The Pointes.

The annual network Upfront event - announcing upcoming programming releases and strategies for the next year - featured musical performances by international superstars like Selena Gomez and Emeli Sande, with a special guest performance by Snoop Lion (formerly known as Snoop Dogg). It was hosted by MTV personalities Sway Calloway, Nikki Glaser and Sara Schaefer.

The Robe moving lights – which also included Robe ROBIN 600 LEDWashes –were supplied by rental company VER, which has a range of Robe moving heads at its disposal.

The Pointes, launched in April at Prolight+Sound, Frankfurt, were used primarily to light the show’s live performances, and were particularly featured during Selena Gomez’s set which included renditions of her new single, ‘Come and Get It’ and her older song, ‘Love You Like A Love Song’.

Pointes were placed on each side of the stage and behind the performers pointing towards the audience. Kenny used them for aerial effects and other ‘beam technology’ treatment of specific elements of the show.

“We were very impressed with their size and brightness, and The Pointe can work as a wash and spot fixture in a very small space,” he said.

The LEDWash 600 units were positioned on some of the scenic elements along the back of the stage, and were used for set and stage washing.
Kenny has lit hundreds of shows in The Beacon and always starts his design concepts with its Gothic architecture. This was juxtaposed with Production Designer Julio Himende’s futuristic set for the Upfront.

The lights – which included other movers, generics and LED fixtures - were programmed by Michael Appel using a grandMA2 full size console.

Appel, one of the industry’s top programmers and operators, also loved the Pointe and all the effects it brought to the table - particularly the prism and beam looks. “It will replace a lot of other similar fixtures,” he and Kenny agreed.

Kenny has been using Robe fixtures on his shows for many years. He appreciates their reliability and the fact that Robe listens to what LDs want and then actively implements these requests and suggestions in their ongoing product development.