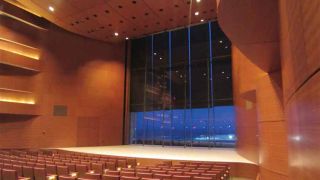 When Kirkegaard Associates began work as the acousticians and AV designers for the new Patrick G. and Shirley W. Ryan Center for the Musical Arts on the campus of Northwestern University, the endeavor could not have hit home any closer for Jonathan Darling, principal consultant at KA.

The Mary B. Galvin Recital Hall features an Avid SC48 Remote Option main mixer, with Yamaha NEXO loudspeakers. “This project was particularly close to me as I was on the Northwestern theater faculty for 15 years teaching theater sound and acting as production coordinator,” he said. “It represents the addition of a major new building to the Evanston campus. The building was constructed along the shore of Lake Michigan and includes views of both the lake and down the lakefront all the way to the Chicago skyline.”

The Ryan Center was designed following an architectural competition that was won by Goettsch Partners of Chicago. Although not primarily known as performing arts venue architects, this prominent firm was once that of Mies Van Der Rohe. Advanced Communications, Michigan City, IN, provided AV installation.

“Northwestern has a highly regarded music school, but besides its Pick-Staiger Concert Hall [Kirkegaard’s first big project as a new company in the 1970s], the School of Music had only a hodgepodge of mostly historical structures with no good small-to-medium spaces,” Darling said.

Acoustics was heavily involved throughout the entire Ryan Center, with KA involved in the three largest spaces, a choral rehearsal room/student recital hall, an opera rehearsal room, which is similar to a black box theater, and the highlevel Mary B. Galvin Recital Hall, the centerpiece of the project.

“This new 400-seat recital hall fills the gap for guest, faculty, and student events not appropriately scaled for the 900-seat concert hall,” he added. “It’s a stunning room with a dramatic basket weave pattern in wood veneer that wraps from side to back walls with an effective result for diffusion. It keeps energy in the room and isolated from noises from the outside with massive construction and structural isolation.”

Initially, the recital hall was to be primarily an acoustic room, but many of its events include narration and speech, and Northwestern wanted a room capable of being used for media presentation and films with music. “So it has both a significant audio system and a very good video system.”

Everything to do with loudspeakers—selection, placement, aiming, and tuning—is the most critical part of the system in these spaces, which are moderately or more reverberant, Darling said. “My personal philosophy is that a lot of electronics available now are uniformly and awfully good. For the PA, there are a lot of products capable of doing a good job. I prioritize the two transducers into the signal chain. For live reinforcement, I try to supply the best mics and premium loudspeakers with appropriate dispersion characteristics for the room. The more reverberant, the more attention paid to dispersion, reaching the audience evenly and being serious about avoiding directing sound into the architecture. All energy reflecting from the architecture is destructive.”

Since his subspecialty is designing for traditional houses of worship, Darling is familiar with the “tap dance” of providing intelligibility in reverberant spaces through the selection and placement of loudspeakers with appropriate dispersion control.

For this project, the originally spec’d loudspeakers were cancelled, and Darling had to make a midstream switch for Yamaha NEXO speakers and amps as replacements.

“I had heard them but hadn’t used them too much at that time, but have continued to use them since,” he said. “I think about loudspeaker design more than anything else because I know that no matter what else, without good loudspeaker design, the system won’t sound good. That’s an absolute. It’s the last link in the chain, and with a weak last link, it doesn’t matter how strong were the links that came before it.”

Another major selection was the Avid main audio mixer. “I’ve used it a lot and have always been pleased with the sound quality,” Darling noted. “Between my initial spec and the install, they came out with the remote box version, so there’s a remote box in the rack that connects with Cat cable to the console. We swung over to the remote option, and that is of great advantage and simplifies the connection of mixer to rack.”

The Ryan Center project was packed with high-end technology, as well as top-notch ideas and solutions requiring creative and intricate solutions for the integration firm, said Jerry Lusinski, principal/owner, Advanced Communications. “It was an opportunity to work on a project where we could really engage our minds in the outcome; that really set this project apart.”

“Due to the level of technical detail required for the project to end without major difficulty, we made sure to spend extra time at the very beginning of the project coordinating with the consultant and the general contractor so that we didn’t run into surprises as the project advanced,” Lusinski said. “This required us to spend more time fine tuning our project submittals and visiting the job site more often than for the typical project. This facility was in no way a standard ‘loudspeaker stamp’ type project, and it was imperative that we approach it with the same level of care during the integration as was spent during the design.”

“Because of my history with the university, I was well aware that this fantastic music school did not have an excellent recital hall, so it was particularly exciting for them to unify students and faculty for smaller events,” Darling concluded. “That was my primary motivation. I’ve heard a number of events there, some with reinforcement, and I think it’s a stunning room in which to experience music and music performance with high-quality audio and video. This is primarily a sound-centric room.”