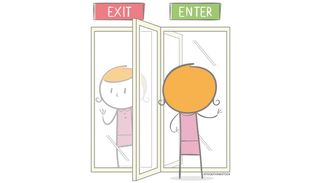 You hated to see your model employee leave, but they went. It was an amicable breakup—you both wished each other the best, and made a point of touching base every so often. Now you have a position to fill, and that former employee happens to be available. It seems like a no-brainer to hire them back (not to mention hassle-free). But before you get caught up in the romance of reunion, it’s wise to ask yourself a few (unromantic) questions.

Peter Bregman, Bregman PartnersWhy Did They Leave?
If the departure was amicable, it’s unlikely that you terminated this individual for poor performance or embezzling company funds. Chances are, they left to pursue an opportunity that would broaden their skills and experience—a great reason for you to rehire them. There is, however, a caveat, noted Peter Bregman, CEO at Bregman Partners, a leadership training consultancy. “The only thing in that situation that you want to be careful about is, did they leave because they’re pursuing bright, shiny objects? And they’re going to be [with you] for three months, or six months, and [then] they’re going to find another bright, shiny object?” If you’re fine with this, then rehire away, but it’s not optimal if you’re looking for something more long-term.

Will You Use Their New Skills?
Logic dictates that if you’re rehiring this person because they’ve grown professionally, you want them to apply their new expertise. But are you willing to give them the opportunity to do so? Bregman used himself as an example: During his tenure with another consulting firm, he got an MBA, and was eager to put what he learned during his schooling into practice on the job. “The consulting firm didn’t acknowledge any of that learning—they just had me continue to do the same stuff I was doing beforehand… they always saw me as the same, and so eventually I left to join a bigger company that saw me differently. They saw my MBA, they saw my expertise, or my competence, or my leadership in a different way,” he recounted. The moral of this story? It’s a shame to go through the process of rehiring someone if you’re not willing to put them to good use.

Susan Reilly Salgado, Hospitality QuotientHow Has Your Company Changed Since They Left?
Hopefully, your organization has evolved since this former employee handed in their resignation: People that used to answer to them have now assumed leadership roles; you may be offering new services; or your core business strategy may have taken a different direction. Susan Reilly Salgado, founder and managing partner of Hospitality Quotient, a leadership development and professional training company, emphasized the importance of communicating all of this to the former employee before entering into a new employment relationship. “It’s an important conversation to have because you’re going to start to create a set of expectations around what it would be like to return,” she said. For example, what if they will be reporting to someone who answered to them in the past? “Those kinds of structural changes are really important political issues to be considering.”

How Have They Changed Since They Left?
We tend to think in linear terms: If someone leaves to pursue another opportunity, we assume that they emerge from the experience a better professional. But what does “better” mean according to your company’s standards? Ira S. Wolfe, founder and president of Success Performance Solutions, an employment testing services firm, warned that even though your former employee may have done a good job for you, and in the position they left your organization for, that employer’s criteria may have been lower than yours. Or, perhaps you’ve raised your standards since their departure. “That [former employee] could have improved [their skills while they were gone] but maybe not enough to fit in,” he said. “It doesn’t mean that they’re not moving forward, but if you’re moving forward at 100 miles an hour and they’re moving forward at 50 miles an hour, there’s a gap.”

He urged employers who are considering a rehire to question the former employee about what, exactly, they learned while they were away, and how they will apply this knowledge and experience with you. “If somebody left voluntarily but they were a good employee before, you’d be crazy not to reconsider them for a rehire. The corollary to that is, just because they worked for you in the past doesn’t mean they’re going to be the right fit for you in the future.”

What Does Your Team Think?
Another political issue concerns those who are already working for you. It may have seemed like your existing employees found this person competent and a good cultural fit when they were working at your organization the first time, but in the name of professional discretion, sometimes appearances are deceiving. “I think socializing the idea on your team, getting input, finding out what people’s concerns may be, and starting to address them in the early conversations that you have with that old employee would be an important starting point,” Salgado said. She concedes that employers can choose to force the rehire on the team, but she isn’t convinced that this is the best foundation for success. “There are a lot of interpersonal dynamics to take into consideration.”

Another thing to think about is that if you don’t consult your team, you may risk losing other top performers. Salgado likened this to making poor recruitment decisions in general: “Sometimes when you make a bad hire, you put all your eggs in that basket, [and] you actually lose a lot of talent around that new hire because they were a bad hire. You don’t want all of your other great team members now deciding to leave because this person came back,” she said. This rehire, after all, will have an effect on at least some part of the company, if not the entire organization. “Protecting the integrity of the team you have in place and respecting what that team brings—make sure that gets respected in your rehiring of this person.”

Creating the Boomerang Effect
One of the tricky parts about rehiring a former employee is when they return to the company to lead long-term, loyal employees who never left, but who weren’t considered for the job this person is filling. “The challenge there is, if you do that consistently, then you’re sending a message—which might be fine, it might be the message you want to send—that in order to succeed here you have to leave,” Bregman said. “If the truth is that that’s what it takes in order to step into a leadership role in the organization, you want to be thoughtful about that message because you might be generating more turnover than you want.”