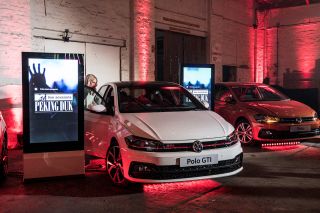 Zytronic has announced that its touch technology has been used to create the double-sided, 55” interactive display in the slimline Blade kiosk created by Design to Production and currently being piloted in Australian Volkswagen showrooms. It is based on Zytronic’s Zybrid touch sensors together with their latest ZXY500 multitouch touch controllers which, when mounted to either side of the Blade display, adds only 12mm to the slim profile of the unit, bringing the whole kiosk in at a thin 40mm.

The critical factor is the selection of Zytronic’s projected capacitive ZXY500 controller. With its proprietary ASIC coupled with in-house developed touch detection algorithms, the touch sensors can be mounted almost directly in contact with the display surface, reducing parallax and enabling the super slim form-factor.

Using Zytronic touch technology was part of the Blade’s design specification from the earliest design phase: “For the Blade to be interactive, was key,” said Design to Production director Peter Gordon. “That’s why we love Zytronic because they make the best, high performance capacitive touchscreens. The feedback we received regarding The Blade has been very positive. People just can’t believe The Blade is touch enabled on both sides — they couldn’t figure out how we added touch and maintained such a slim profile. That’s a testament to the projected capacitive technology that Zytronic produces — it’s market leading.”

“There’s incredible attention to the detail,” said Peter Gordon. Which is one reason why the Blade has caught the eye of the automobile industry in Australia, with some 20 units taking part in a pilot trial in Volkswagen garages around Australia. The Blade is beautifully resolved and ships with low-profile castors that allow the unit to be easily relocated in a vehicle showroom — all you need is power.

For Peter Gordon, the magic is all in the slender profile and the success of future product development is in concealing the touch technology as to be almost invisible: “We’ve been manufacturing kiosks for quite some time; we know what impresses people; and it’s the thickness of the unit that is always the key. The slimmer that silhouette; the more impressive the kiosk — hence the name, Blade. With their latest ZXY500 touch controller, Zytronic leads the market in this respect. I mean, Zytronic must be doing something right because everyone knows they’re the best!”

The Blade is built to exacting standards in Sydney by the Design to Production manufacturing team. “We use state of the art equipment and only the best manufacturing techniques,” said Gordon. “There are other double-sided kiosk and signage products in the market but not many are touch enabled. Those that are, use inferior touch technology, and are noticeably chunkier as a result. The Blade is ‘a first’ in that regard.”

Being touch enabled, the Blade in-built content invites patrons to tap an on-screen icon to request more information. A selection of brochures is available and the customer can have the desired material emailed to them immediately. Naturally, the sales team are also alerted for follow up — informing Volkswagen regarding the vehicle the user is interested in, as well as their name, along with age and gender data derived from the on-board Quividi real-time attention analytics solution.

Peter Gordon concluded, “It’s early days, and there are myriad potential applications for The Blade.” Design to Production are in discussions about using The Blade to entertain children with interactive showroom games (“how many bales of hay can you fit into the back of an Amarok!”), acknowledging that keeping the family entertained allows patrons to dwell longer and have the time required to make a significant decision such as the purchase of a new car.