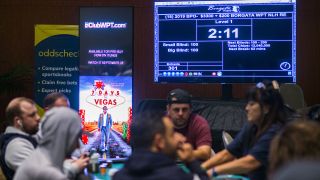 Broadcasting globally in more than 150 countries and territories, World Poker Tour (WPT) is the premier name in gaming and entertainment and has ignited the worldwide poker industry. As a leader in the innovation of the sport since 2002, WPT also hosts a number of high-profile corporate and VIP events throughout the year. Needing a design element that could accentuate the visual experience at each tournament and event, WPT global events manager Steve De Santis invested in reFLEXion LED video systems from Nashville-based PixelFLEX.

“WPT features a lot of professional and recreational players we see often who look for comfortability and reliability with tournament structures they trust from people they recognize and know,” De Santis said. “We have a footprint on six continents and our players love the quality and consistency of our events.”

Knowing the level of trust and commitment shown by the players, De Santis wanted to ensure that each event provided the most engaging gaming experience. Having previously relied upon standard graphic displays to help create the ideal environment, he now wanted to heighten the creative potential of the visual displays to match the excitement around each tournament.

“As part of our event presentation and playing environment, we had been using older graphic kiosks for quite some time, which really was the impetus for our search,” De Santis said. “As an innovator in the game of poker, WPT wanted something that was a bit more impactful and most importantly to our tour management personnel, portable. We needed a technology solution easy to transport and able to deliver a unique visual impact.”

A dynamic replacement for traditional static and backlit signage, the reFLEXion LED is a self-contained 2.5mm pitch/resolution video display with a sleek design for easy mobility throughout any space. Its Wi-Fi connectivity allows for networking and content updating to maximize the viewer experience, and it is customizable with multiple base options. The LED display of reFLEXion can be further customized to a specific size with an assortment of color aluminum frame options, plus it can create seamless right angles to wrap around 90-degree corners wherever needed.

“One of WPT’s leaders had actually heard about the reFLEXion LED system before, but initially thought it might be a price concern for us,” De Santis said. “As I took the lead on the project, we sourced about 20 different manufacturers and were really open to trying any solution as long as it was lightweight and portable. What we found was that the reFLEXion was a perfect fit for us, and it was the best solution for both our needs and our budget as we kicked off our 18th season.”

With the technology from PixelFLEX now on hand, De Santis and his team got straight to work putting them to use. Ready to see the difference created by using high-definition LED video displays throughout the tournament floor, the reFLEXion systems took the event design to a completely different level.

“We used the new LED video displays for the first time on a main tour stop in Atlantic City, and we found that the content options are almost limitless,” De Santis said. “You can easily layer video, text, and still image content on top of each other, and we are very excited to experience its full potential. We are ready for everything that the displays can do and it seems that they can accommodate anything we can imagine.”

While some may be wary of how easy it might be to create dynamic video content for an LED video display, De Santis was also surprised by the simplicity of the reFLEXion operating system. Working within the wireless capabilities of the displays, the event management team at WPT was quickly able to have their new event design ready for its debut.

"Utilizing the software provided by PixelFLEX, we were easily able to plug-and-play with the reFLEXion LED video displays,” De Santis said. “We had quite a bit of fun seeing what we could design on the fly as we were able to connect to them wirelessly, which was an absolute lifestyle change for us. With its intuitive nature and the simplicity of the software, our event setup was a lot easier and it allowed us to start using them right out of the box without any issues at all.”

Wanting to also take advantage of the portability capabilities of the new displays, De Santis would have another opportunity for creativity on their first tour stop. With a number of events taking place as part of the tournament, the reFLEXion LED video systems doubled-down on their design potential.

“The mobility of the devices make it so that we can be more creative in our decisions of how to impact not only the tournament, but also our client and corporate events as well,” De Santis said. “At the Atlantic City event, we were able to relocate the displays from the casino floor into the sports book and upload new content specifically for an exclusive VIP player party. The ability to take a digital kiosk from one side of a venue to another has never been an option for us, and this opens up a whole new level of creative possibilities.”